Every U.S. citizen can still legally travel to Cuba, pre-approved, under the “support for the Cuban people” license. This program is designed to maximize “support for the Cuban people” through stays at private B&Bs, meals at private restaurants, and interactions with independent artists, private tobacco farmers, owners of classic convertible taxis, etc.

Please join me and automotive and motorcycle correspondent Charles Fleming as we host a thrilling 7-day motorcycle adventure with my close friend and Profil-Riesen road guide Luis Enrique González. Our days will be full of fun meetings with Cubans from all walks of life… such as artists, tobacco farmers, owners of B&Bs and private restaurants, and above all Cuba’s resourceful and indefatigable harlistas (owners of pre-revolutionary Harley-Davidsons) and other motorcycle enthusiasts. 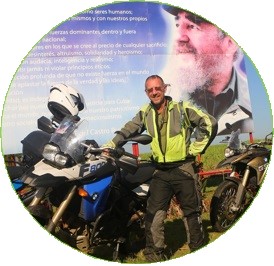 It’s true to say… no-one knows Cuba as well as Christopher, the Lowell Thomas Award 2008 ‘Travel Journalist of the Year’ and the author of six travel guidebooks about Cuba. National Geographic acclaimed him “one of the world’s leading authorities on Cuba travel and culture.” In 1996, Chris shipped his BMW R100GS PD to Cuba and made a three-month, 7,000-mile journey as a licensed journalist, resulting in publication of his Moon Cuba guidebook and his award-winning travelogue Mi Moto Fidel: Motorcycling Through Castro’s Cuba. In January 2013, Christopher led the first licensed U.S. motorcycle group tour of Cuba end-to-end since the 1959 Revolution. He has since led numerous motorcycle tours in Cuba on behalf of MotoDiscovery, Edelweiss Bike Travel, Bob’s BMW of Maine, and the BMW Riding Academy of Turkey, as well as almost one hundred tours to Cuba on behalf of National Geographic Expeditions and other tour companies. In addition to riding “sweep,” ensuring the cohesion of the group, and attending to logistics, Christopher brings something unique to these tours… an ability to share a profound knowledge of Cuba, providing unparalleled context for your travel experience. 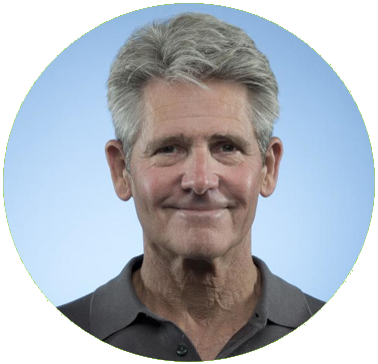 Luis Enrique González has more experience leading group motorcycle tours in Cuba than any other Cuban motorcycle enthusiast and road guide. Between 2013-16 he worked alongside Chris to lead the very first motorcycle tours in Cuba for U.S. citizens using BMW 1200GSs, F700s, and a medley of Harley-Davidsons. Since 2017, he has acted as lead guide for Profil-Reisen and has led scores of tours throughout Cuba end-to-end. An English-speaker, he’s a natural raconteur and all-around “colorful character” with a Rolodex of contacts throughout Cuba (his personal history includes as a mariner and, in the 1980s, as a Lieutenant in Cuba’s Fuerzas Armadas Revolucionarias in charge of an anti-aircraft battery in Angola). Luis is also responsible for maintaining Profil-Reisen’s fleet of F700s in Cuba. A superb mechanic, Luis exemplifies Cubans’ resourcefulness, ingenuity and indefatigable good humor. When not leading tours, Luis loves tinkering with his collection of pre-revolutionary Harley-Davidsons, a miscellany of other antique motos, plus his 1948 Buick.

We’ll ride BMW F700 GSs exclusively. Each will be fitted with twin side panniers. In addition, we will provide a support van and driver. 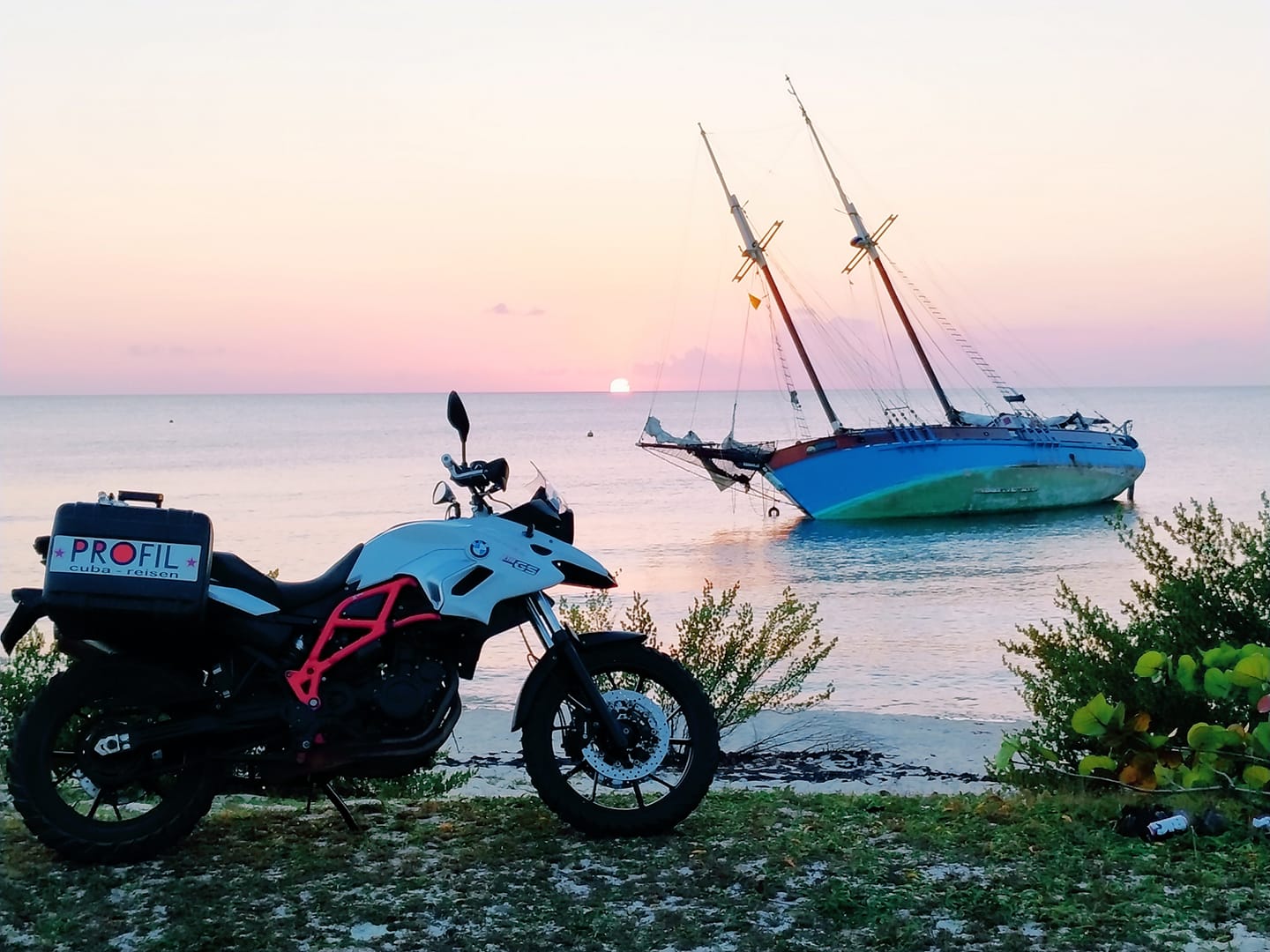 Day 1: Meet in Havana
The U.S. “support for the Cuban people” license allows individuals to travel freely to Cuba as they wish. We’ll meet this evening at our B&B in Habana Vieja (Old Havana) for a welcome reception. Our welcome dinner will be nearby at Chacón 162, a popular bikers’ bar and restaurant.
Meals: –
Overnight: Hostal Maletas (B&B), Habana Vieja

Day 2 (150 miles): Habana Vieja / Greater Havana / Bay of Pigs
After breakfast, we discover the colonial-era core of Havana, which celebrated its 500th anniversary in November 2019. Chris will guide us on foot through the cobbled pedestrian-only plazas of this magnificent historical quarter. After lunch in Plaza Vieja, we return to our hotel to change into our motorcycle gear and pick up our motorbikes. In order to get familiar with your bike, we’ll make a circuit of greater Havana, including such iconic sites as the Malecón, Plaza de la Revolución, Museo Ernest Hemingway at Finca Vigía (the author’s former home). We then head east along the Autopista—the freeway—which delivers us via the Zapata Peninsula to Playa Larga (“Bay of Pigs”). We’ll overnight by the beach where the CIA-trained Cuban-American exile army came ashore in April 1961.
Meals: B
Overnight: Hostal Enrique (B&B), Playa Larga

Day 3 (120 miles): Cienfuegos / El Nicho / Trinidad
This morning we’ll be glad for the F700s as we follow a dirt track along the Caribbean shore to reach the lovely bay city of Cienfuegos. After a brief stop to explore the city, we’ll follow a superbly scenic route as we climb into the Sierra Escambray mountains for lunch at El Nicho waterfall. We’ll then follow convoluted and challenging forest trails to the mist-shrouded summit at Topes de Collantes to take a switchback down to the UNESCO World Heritage City of Trinidad—Cuba’s most authentic and perfectly preserved colonial city. This evening enjoy strolling the cobbled colonial streets, plus music and dance at one of Trinidad’s many clubs.
Meals: B
Overnight: Casas particulares (B&Bs), Trinidad

Day 5 (184 miles): Sagua la Grande / Varadero
Today we follow the Circuito Norte (North Coast Road) through the Vuelto Arriba tobacco country and beautiful coastal mountain landscapes of Villa Clara. We’ll lunch beside the sea in the fishing village and former rum-and-sugar port of Isabela de Sagua. Then continue via Cárdenas to Varadero, Cuba’s premier beach resort, where a sugar-white beach, and scores of hotels, spill along the full 8-mile length of the Hicacos Peninsula. Tonight enjoy dinner at Salsa Suárez paladar, and take in the varied nightlife of Varadero.
Meals: B
Overnight: Casa Beny and other casas particulares (B&Bs), Varadero

Day 6 (100 miles): Matanzas / Havana
Our last riding day is a beauty as we head west along the Atlantic shoreline for the bay city of Matanzas. We’ll lunch at Café Ajiaco, in the fishing village of Cojímar, a few miles east of Havana. We then head into the city. After return of the motorbikes, the transfer bus takes us back to our B&B in Habana Vieja. After cleaning up, we’ll ride in convertible classic cars to our farewell dinner at La Guarida, Cuba’s most sensational restaurant.
Meals: BD
Overnight: Hostal Maletas, Habana Vieja

Day 7: End of trip
Today transfer to the airport for your departure flight. Or, if you wish, you can stay some more days in Cuba. 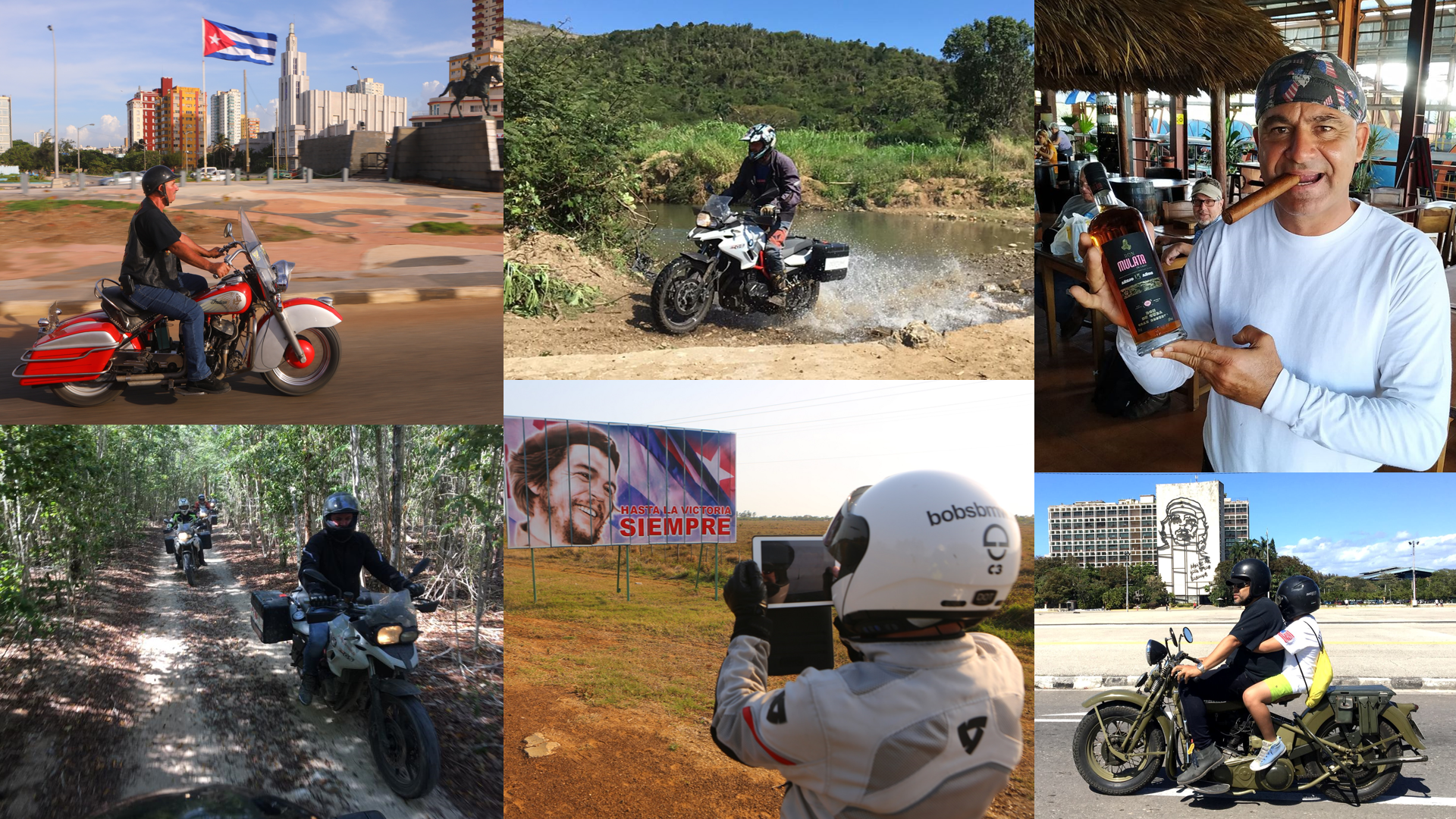 “Christopher… I gave the tour a 99 on a 100 scale as I can’t imagine it gets much better than we experienced in Cuba. You did everything well and made sure that everyone in the group had a very memorable trip.”
BOB HENIG, BOB’S BMW of MAINE 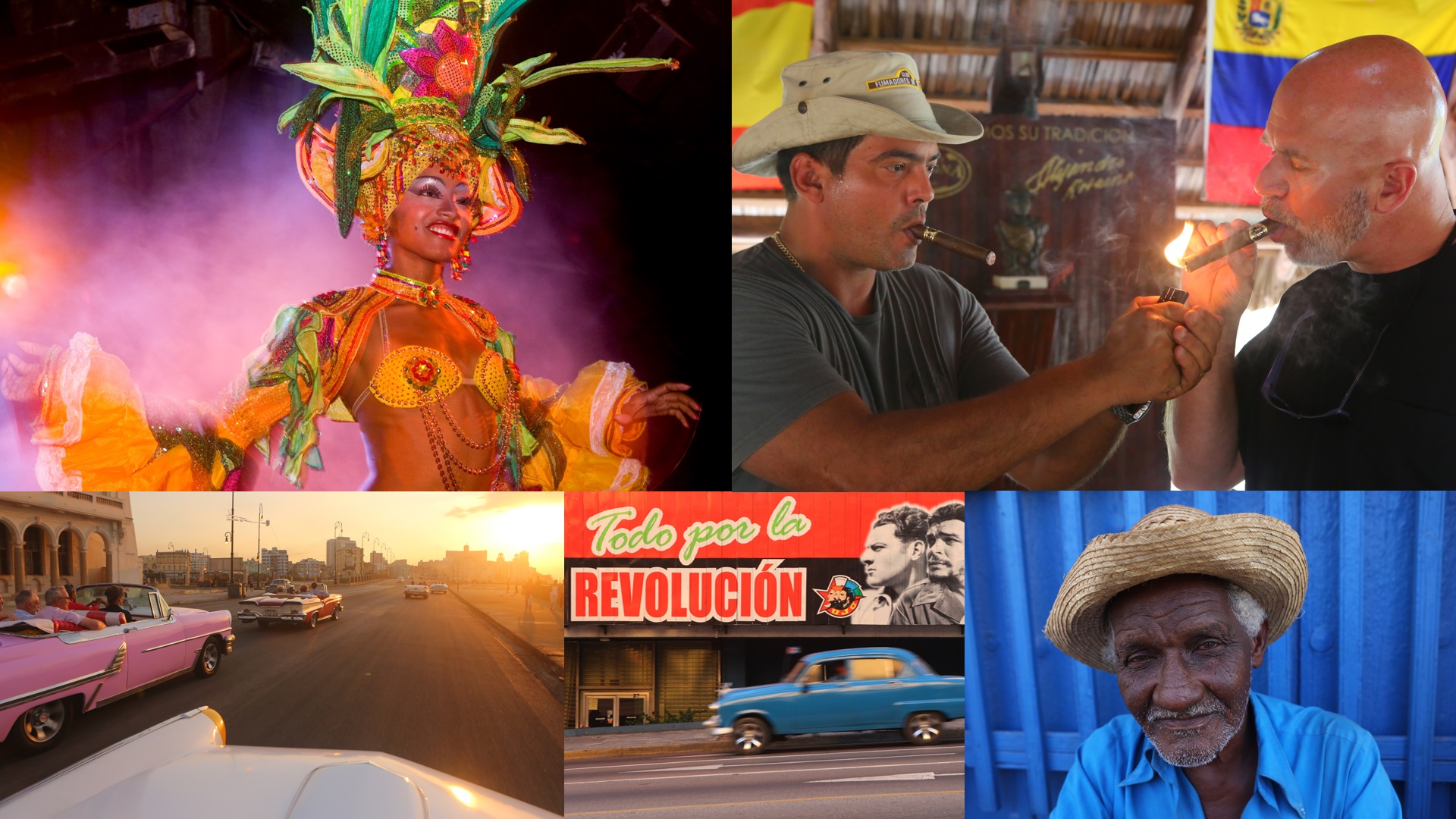