You may be wondering why I’m reviewing a book published in 2001 and, from what I can tell, never released in the USA.

Well, firstly, I was one of the students mentioned in the publisher’s opening book cover blurb: “In 1976 four students took a trip to the desert. Now the repercussions of that fateful summer are coming back to haunt them.” (Actually there were six of us, but for literary purposes four certainly works more effectively.) 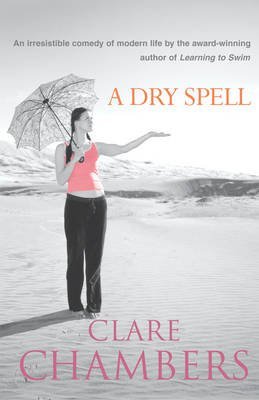 In A Dry Spell, the details of that ‘fateful” trip to the Sahara of southern Algeria in the summer (!!!) of 1976 hew very close to the truth and are drawn from the detailed diaries of the author’s husband, Pete Wickert, who participated with me in the research expedition as assistants to a Ph.D. candidate—represented as “Hugo” in the novel.

The characters are only loosely based on our individual personalities. In truth, I don’t see myself in the novel. But there are moments and events where I can plainly see the true protagonists and/or recall the real events in my flashback mind’s-eye. (Reference Hugo: “’I heard he got pissed one night and crapped on the bonnet of some professor’s car,’” is actually drawn from an event of April 1976 when [… well, I won’t say which of the protagonists it was, but fortunately it wasn’t me], inebriated on vodka, did indeed crap on the hood of a car… except it was that of a Commissar in Communist Poland during a student exchange we participated in together. You can imagine the consequences. Arrested, he was put on the next plane home, and there was much debate in the university as to whether our university-funded Sahara expedition would thereafter proceed.) 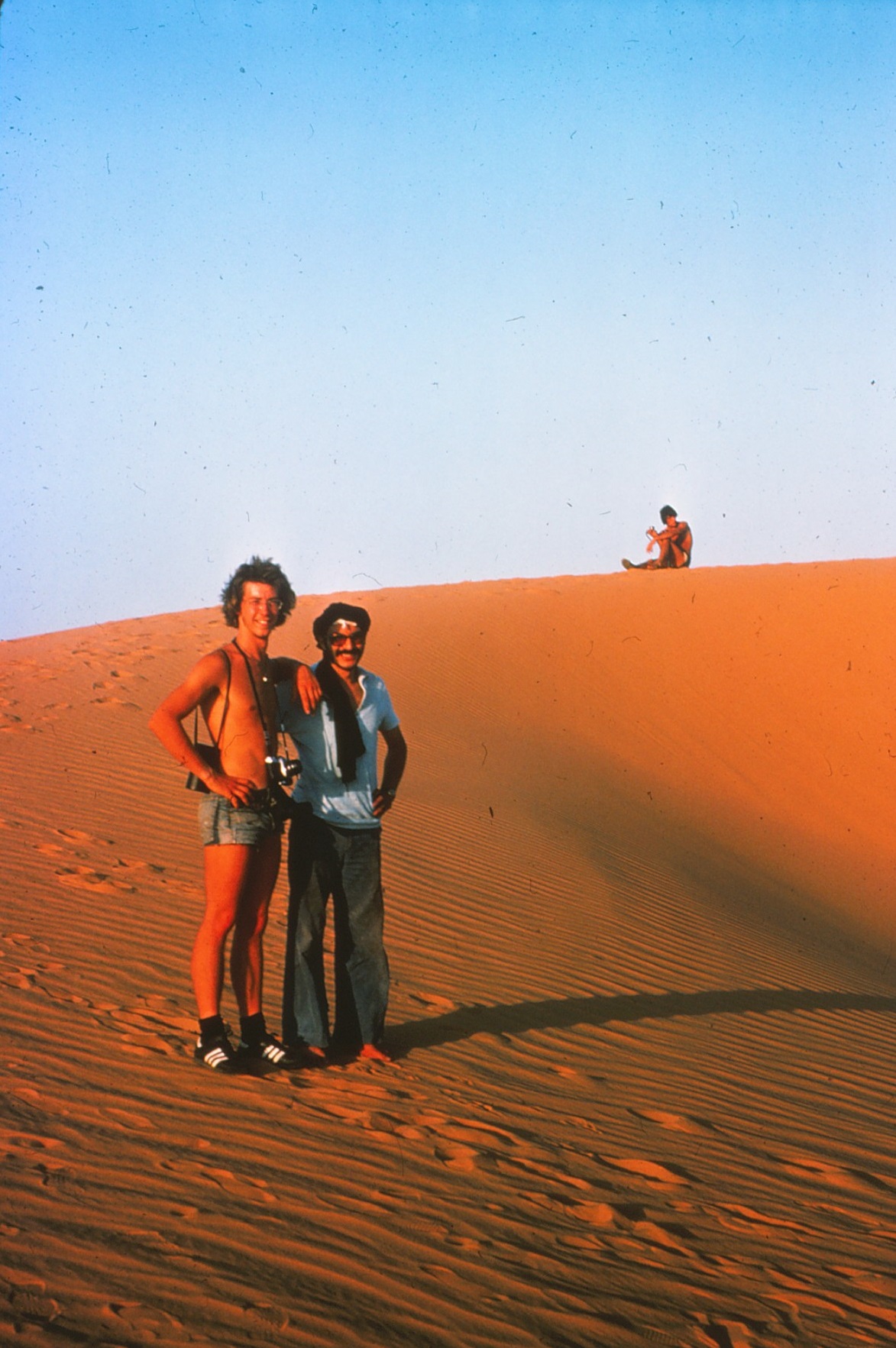 Me and our guide Hamid, who features in the book. The author’s future husband, Pete Wickert, sits atop the dune.

Personal interest and emotional involvement aside, A Dry Spell is a fantastic read! A diamond in the parched and dusty literary desert landscape.

The stand-out is Chamber’s brilliant creativity in using our adventure as the effective backdrop to a highly original, convincing, and above all compelling piece of damn good fiction.

Chambers describes in detail our four-day “house arrest” (en route to the Sahara) at a remote Algerian Customs post in the Atlas Mountains bordering Tunisia, near Souk Ahras. I thought she was going to use a real-life “fateful” (certainly traumatic) event that occurred there as the hook upon which to hang the story. Wrong! Instead, she contrives the highly plausible murder of one of the four students—Martin—later in the heart of the desert.

Thankfully, that never happened. But it becomes a superb contrivance, the seminal relevance of which only becomes evident at the book’s conclusion, providing a brilliant closure and happy resolution to the multiple and intertwined tensions in the lives of the surviving students two decades later. 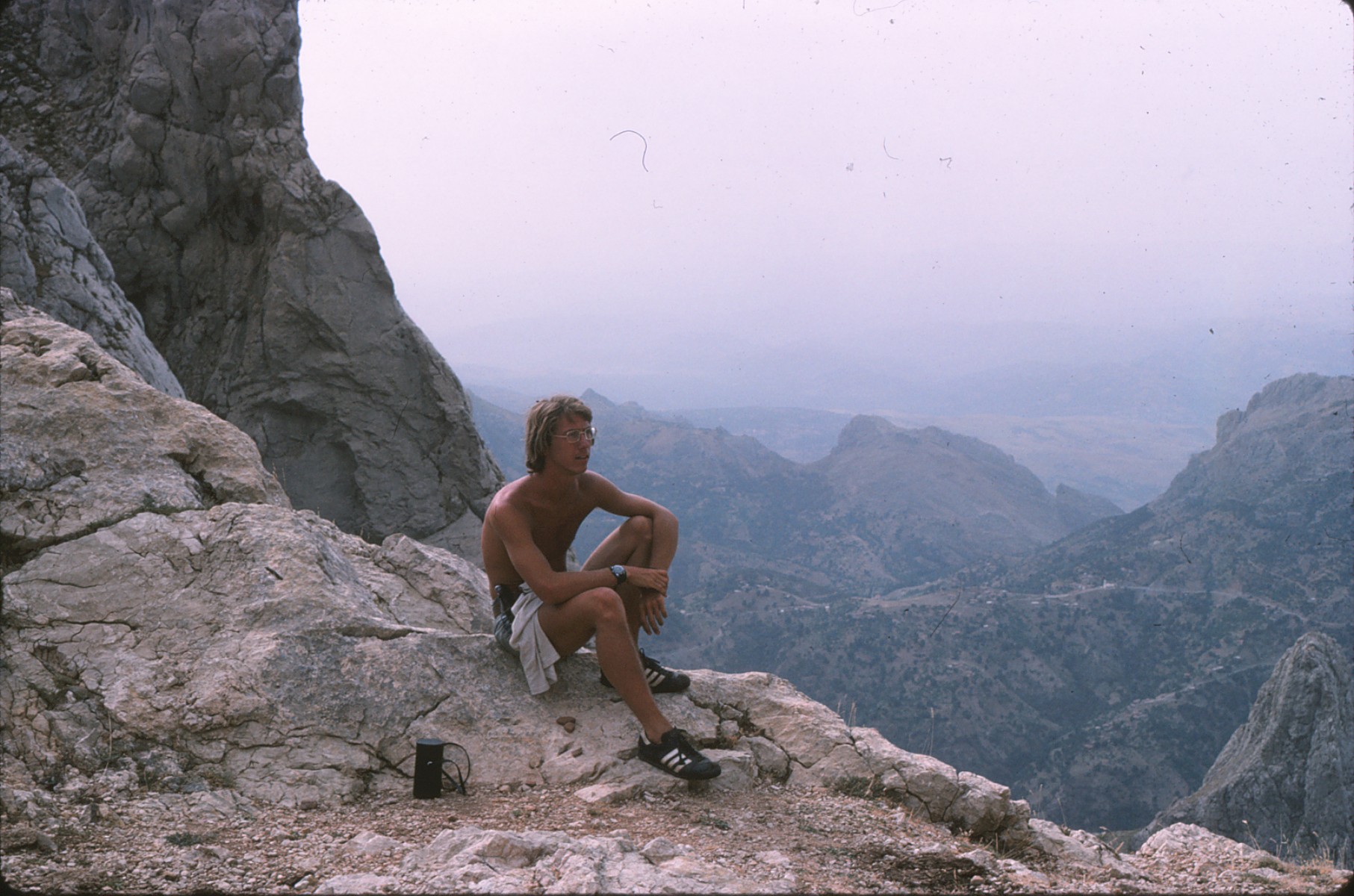 Me in the Atlas Mountains of Algeria during the Sahara Expedition, 1976

Chambers moves fluidly back and forth in time to establish the relationship of our four protagonists in their student days as geographers at University College London, and how their disparate lives intertwine then and “now.”

The REAL story, set in London, is in the “now.”

Nina, now a single mother to a 17-year-old son, James, ostensibly fathered by Martin, is having issues with his coming of age. Guy—clearly based on Pete, in real life a headmaster—is head of a junior school; his wife has “gone off” sex (one hopes this is purely fictional), is consumed by her seeming failings as a mother taunted by a young spoiled-brat child, and finds herself drawn to a quasi-lesbian infatuation following a casual encounter.

Nina and Guy have gone their separate ways following their traumatic desert adventure. Then Hugo, a boorish and bumptious eccentric lacking all social graces (and with who Nina and Guy, happily, have had no further contact post-Sahara), writes to each to let them know he’s returning to live in the UK after many years absence and is intent on imposing upon them.

His threat of an impending appearance draws Nina and Guy back together in the most consequential of ways, threatening, not least, to shatter Guy’s already strained marriage. Guy, it appears, is James’ father! As the plot unfolds towards its denouement, this shocker (kept secret all these years by Nina) actually leads to a happy ending in which Guy’s marriage is saved, Heidi the spoiled-brat metamorphoses into a dream child, and with the final page his wife regains her libido.

However trite this story line may seem, the well-crafted plot is intelligent, intricate, amusing, and totally absorbing. Thoroughly believable, too. Perhaps most captivating is that Chambers proves herself adept at profiling the aspirations, insecurities, petty jealousies, etcetera, of the human condition. A Dry Spell is an impressive and engaging study in psychology, breathing a true-to-life feel to the personalities and their intertwined relationships.

This is the first novel I’ve read in many years, and although the motivation was unusually personal, by any standard this is a novel that isn’t likely to disappoint anyone. Anglophiles especially will absolutely adore the quaint and quintessential Englishness of it all, expressed with delicious nuance and laced with subtle satire.

(However, why the second-hand book I received shows a brown autumnal leaf as its cover is a head-scratcher.)

Clare Chambers was born in 1966, attended school in London, read English at Oxford, and wrote her first novel while she was living in New Zealand. She won the 1998 Parker Romantic Novel of the Year award. She lives in Kent with her husband, Pete Wickert.