Most lay readers know the names Fidel Castro and Che Guevara, but would be hard-pressed to name any of the other key personalities who played a seminal role in the Cuban Revolution, never mind their backstories. Fewer still know one of my favorite true tidbits so seemingly absurd that it rises to the level of myth…

After Fidel’s Rebel Army of 82 fighters landed in Cuba on December 2, 1956, following a horrendous week-long journey from Mexico, and was dispersed when ambushed by Batista’s Army (only 18 survived), Fidel and Raúl Castro and six other starving, bedraggled survivors coalesced at an agreed rendezvous point called Cinco Palmas. Tony Perrotet picks up the story…

“According to the eyewitnesses, no sooner had the Castro brothers embraced than Fidel wanted to know how many guns Raúl had saved.
‘Five,’ Raúl said.
‘Well, we have two!’ Fidel exulted. ‘That makes seven.’ Then he declared: ‘Now we’ve won the war.’
The others shot sidelong glances at one another. Despite the litany of disasters, Fidel’s Olympian self-confidence had not been dented.” 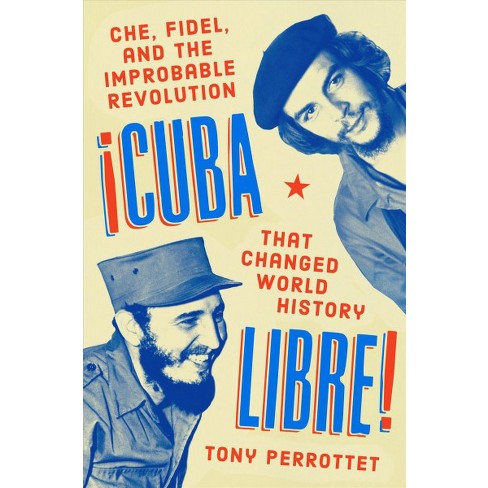 In this regard, Perrotet’s subtitle to his stellar book—¡Cuba Libre! Che, Fidel and the Improbable Revolution that Changed World History—is spot on.

It’s hard to imagine a more unlikely long-shot success story… A bunch of bearded, winging-it-as-they-go, self-taught revolutionaries overthrows one of the USA’s favorite (yet most sordid) dictators and his 40,000-strong, U.S.-equipped professional Army. Then has the audacity to poke Uncle Sam in the other eye by saying “¡Hasta la vista!” and jumping in bed with the Soviets.

I mean, really, who were these folks?

Perrotet’s meticulously researched and humorous, even gossipy, and relentlessly ripping yarn offers a delicious smorgasbord of juicy details and tantalizing new revelations that reveal the human beings behind the nomenclature, “revolutionary!”

Given rare access to Cuba’s guarded treasure chest of official documentation, Perrotet paints a human face on the personalities who gave their all to topple the brutal Fulgencio Batista dictatorship. The students. The lawyers. The campesinos (farmers and farmhands). The ordinary folks who did extraordinary things, usually in the face of great danger and all too frequently for a savage price at the hands of Batista’s thuggish guardia rural and sadistic secret police.

Not least among them, of course, are the many women—mostly well-educated, middle-class young ladies from upstanding families—who acted as couriers, spies, and brave-as-the-guys combatants. (One Rebel fighter, Vilma Espín, married Raúl. Another, Aleida March, married Che.) Chief among them is Celia Sánchez, the woman who ran the secret supply network for Fidel’s Rebel Army and, later, became a Rebel fighter, his secretary and lover, and also his compass. And revolutionary fighters Melba Hernández and Haydee Santamaría, who participated in the attack on Moncada Barracks on July 26, 1953 (when captured, Haydee was shown the torn-out eye of her brother and the testicles of her boyfriend, both fellow revolutionaries tortured to death in the aftermath of the suicidal and failed attack that officially launched the revolution).

Then there are the “gringo guerrillas.” U.S. volunteers who fought alongside Fidel and Che. And wacky movie star turned Hearst newspapers special war correspondent Errol Flynn, present with Fidel on the front line of the Revolution the moment that Batista fled Cuba.

It’s a human, even romantic, almost absurd, story that culminates in one of the most improbable and seminal events of the 20th century.

In so thoroughly peeling back the covers to reveal the mistresses, mishaps, and Machiavellian deceipts, Perrotet has written an invaluable, unbiased, and vastly entertaining book that dissects the Revolution from a new angle.

Other recently published (and excellent) books that profile the human dimension to this story include the very touching Remembering Che: My Life with Che Guevara, by his widow Aleida March; and Nancy Stout’s One Day in December: Celia Sánchez and the Cuban Revolution.