The big thud you may have heard yesterday was the sound of a mammoth new tome—The Complete Book of BMW Motorcycles: Every Model Since 1923—landing on my desk, fresh off the press last week and courtesy of Motorbooks. This gorgeous large format (10”x12”) masterpiece by Ian Falloon is every bit as impressive as the Beemer marque itself, and not merely because it’s as big as a K 1600 GTL.

I couldn’t wait to rip off the cellophane cover! Nice touch, BTW. 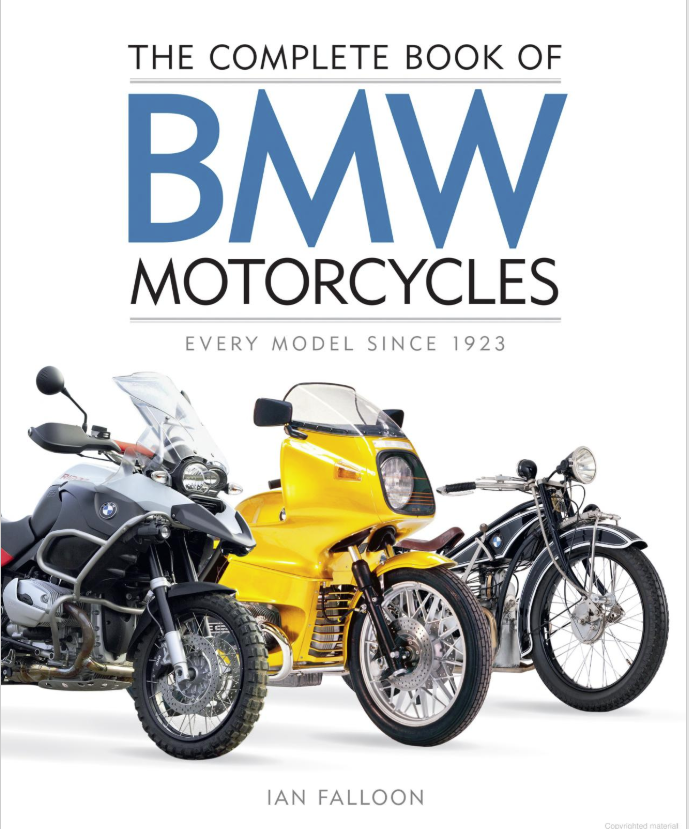 First impressions are important, and the great cover design and high-quality heavy stock throughout offer instant visual appeal… kinda like the K 1600 GTL!

Falloon is well known for his million or so books on BMWs, Ducatis, Moto Guzzis, Triumphs, and even the Laverda and MV Augusta. In this third edition of The Complete Book of BMW Motorcycles, updated since 2015, Falloon brings us up-to-the-minute with profiles on such 2020 models as the F900R and the latest and fastest superbike, the S 1000 RR.

In 312 beautiful pages, this magisterial book regales nearly a century of motorcycling excellence spanning the complete range of BMW models from the dawn of the company’s motorcycle manufacturing in 1923, after the Treaty of Versailles banned Germany from manufacturing aircraft engines in the wake of World War I. (For those not aware, the BMW logo represents an aircraft propeller, from the company’s early days when, as Rapp-Motorenwerke, it made aircraft engines.) 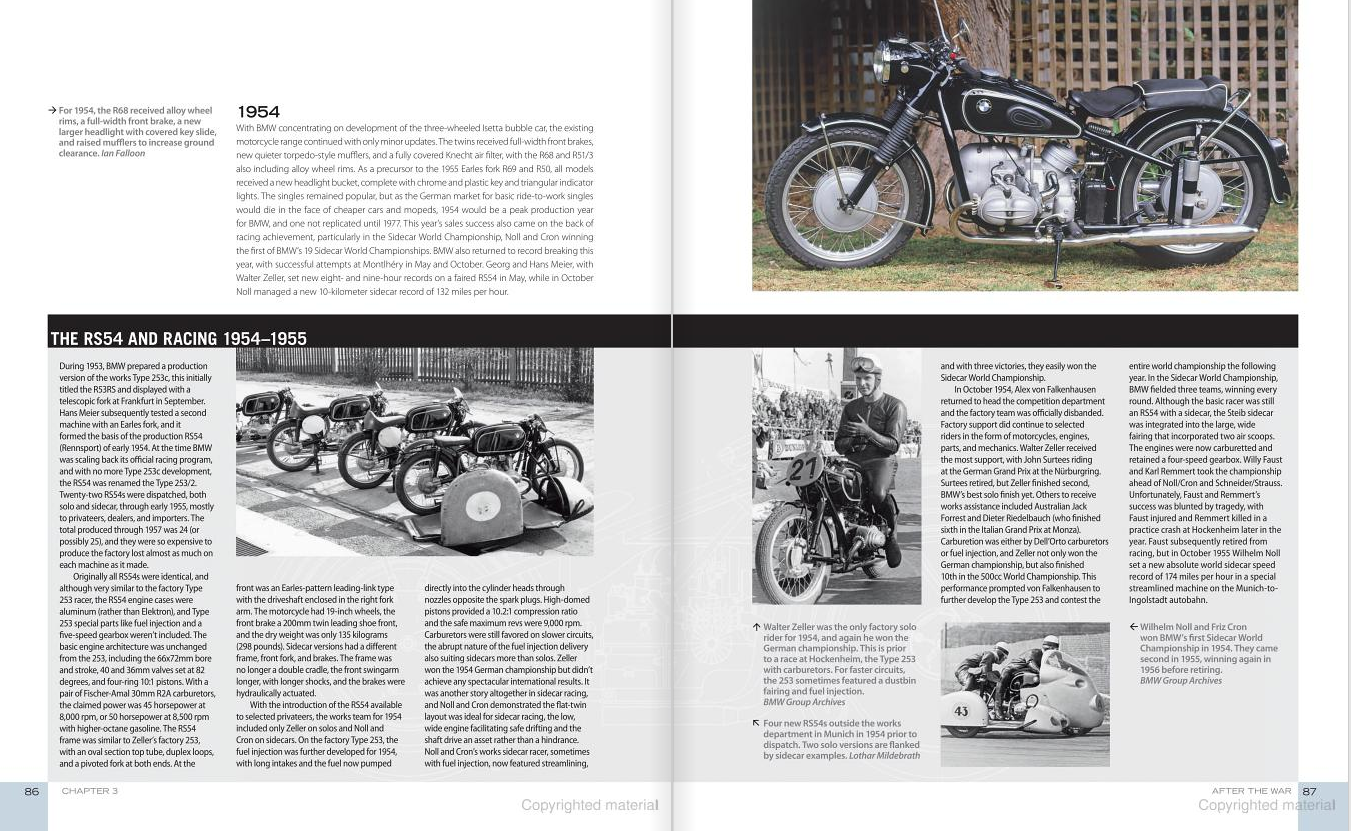 The company’s first motorcycle engine—the M2 B15—was a reverse-engineered copy of the horizontally opposed twin that powered the early Douglas. Thereafter the company became known for its innovation, noteworthy in its first full motorcycle model, the R32, which introduced a magneto ignition, three-speed gearbox, plus the transverse engine mounting and shaft drive system still in use today for the iconic BMW boxer twins.

Falloon treats us to a full spectrum of history, including key personalities, design evolution, and heaps of statistics… all supported by hundreds of historic and contemporary black & white and color images, design illustrations, 3D-cutaways, and data tables. This year-by-year profile includes the near-demise of BMW’s motorcycle division in the early 1960s following the rise in popularity of its automobiles and stagnating two-wheeler sales.

And so to Chapter 5… 1970-1980 NEW GENERATION: SUPERBIKES AND SUPER TOURERS. And with it the end of the BMW two-wheeler tailspin courtesy BMW’s introduction of the R50/5, R60/5 and R75/5 series and the latter’s GP racing success. Then, bingo! 1974 brought us the smoke-colored R90S superbike cafe racer… one of the most beautiful motorcycles ever made and, surely, I would argue, the bike that above all put BMW on the map. (Unfortunately, Falloon fails to answer what the heck the bikini babe is doing with a R90S in the river!) 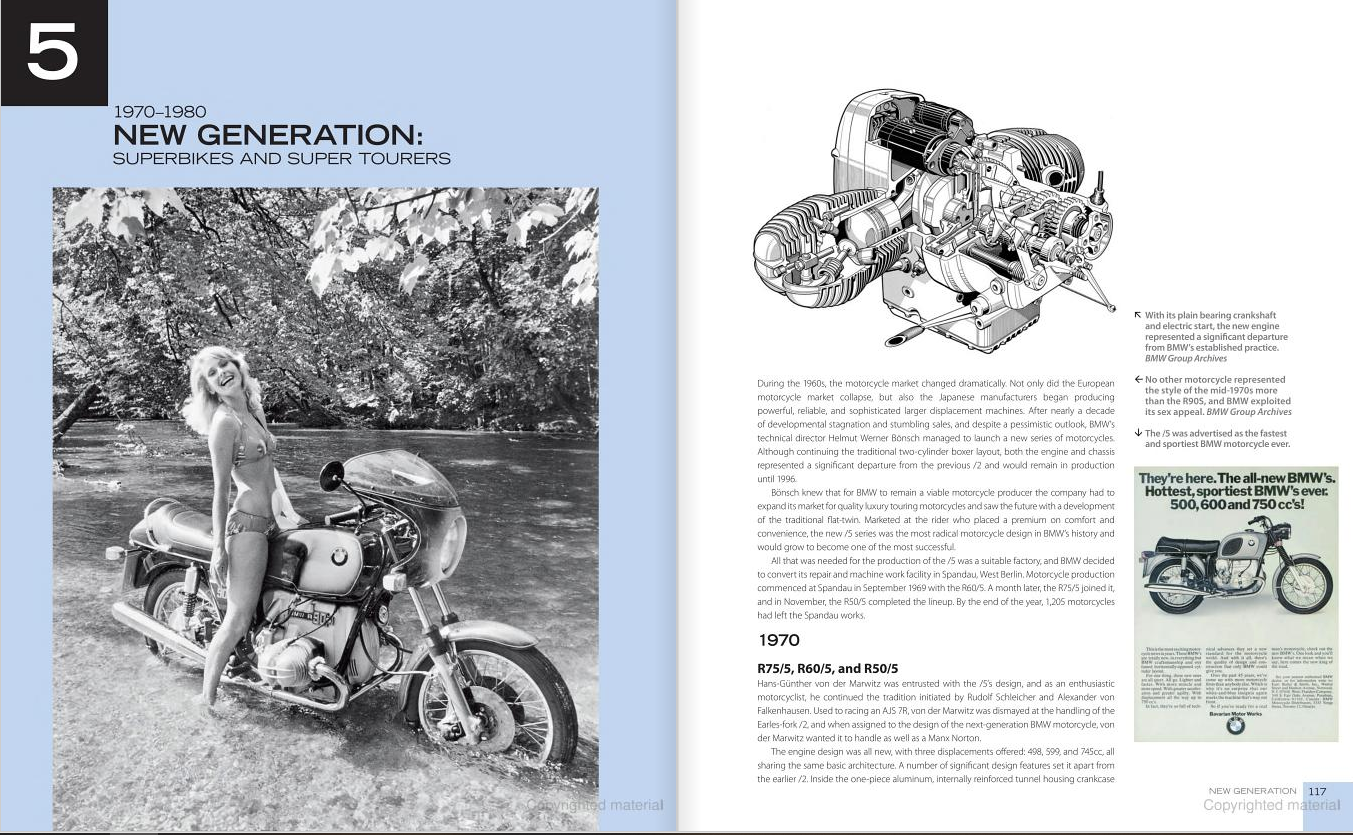 From thereon, page after irresistible page profiles a company on the up and up. It’s all there. Every model, year by year… The K series… The phenomenal GS (Gelände Sport) series that launched a dual-sport revolution, including the 1990 Boxer R100GSA Paris Dakar (my fave; I owned a 1991 model that I rode 7,000+ miles around Cuba, resulting in my own book, Mi Moto Fidel: Motorcycling Through Castro’s Cuba), … all the way up through today’s high-performance masterpiece motorcycles, such as the lighting fast, World-Superbike-dominating S1000RR.

In sum, The Complete Book of BMW Motorcycles: Every Model Since 1923 neither lies nor disappoints. Every production motorcycle ever built by BMW is profiled (including essential technical specifications). The sophisticated, performance-defining R5 (1936)? The R12 with sidecar issued to the Wehrmacht in WWII for the Blitzkreig? The entry-level F650 Funduro made in partnership with Aprilia? Guaranteed… you name it. It’s there, along with fascinating sidebar treats, such as the Paris-Dakar success story launched by Hubert Auriol’s 1981 and 1983 victories.

So if you’re a rider or an armchair motorcycle enthusiast looking for a guilty splurge, I can’t think of a finer oversized coffee-table book to display in your living room, or to gift someone as a special treat.

Meanwhile, stay tuned for news of my own book about Harley-Davidsons, soon to be announced!