The venerable Italian Moto Guzzi motorcycle marque turns 100 years old in 2021. And to celebrate the occasion we get a lavishly illustrated new coffee-table book from Motorbooks titled THE COMPLETE BOOK OF MOTO GUZZI: EVERY MODEL SINCE 1921 (272 pages, US$60). 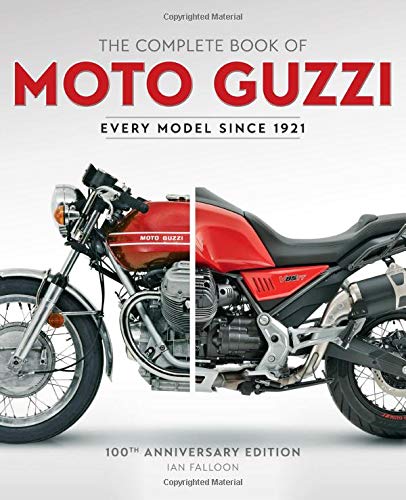 It’s actually an updated version of a splendid tome first published in 2017.

Author and motorcycle historian Ian Falloon, a widely respected Moto Guzzi expert, has published umpteen books on various motorcycle marques. He knows his stuff. This is Falloon’s third book about Moto Guzzi: he previously wrote The Moto Guzzi Story: Racing and Production Motorcycles from 1921 to the Present Day (2005), plus The Moto Guzzi Sport & Le Mans Bible, a detailed examination of two of acclaimed Moto Guzzi’s V-twins from the 1970s and 1980s.

This latest, more encyclopedic, 10×12-inch compendium collates the entire spectrum of Moto Guzzi motorcycles into a visually stunning presentation supported by lively, concise and fascinating details spanning the generations. And more than 350 photos and illustrations help keep the reader gleefully engaged, and even salivating. 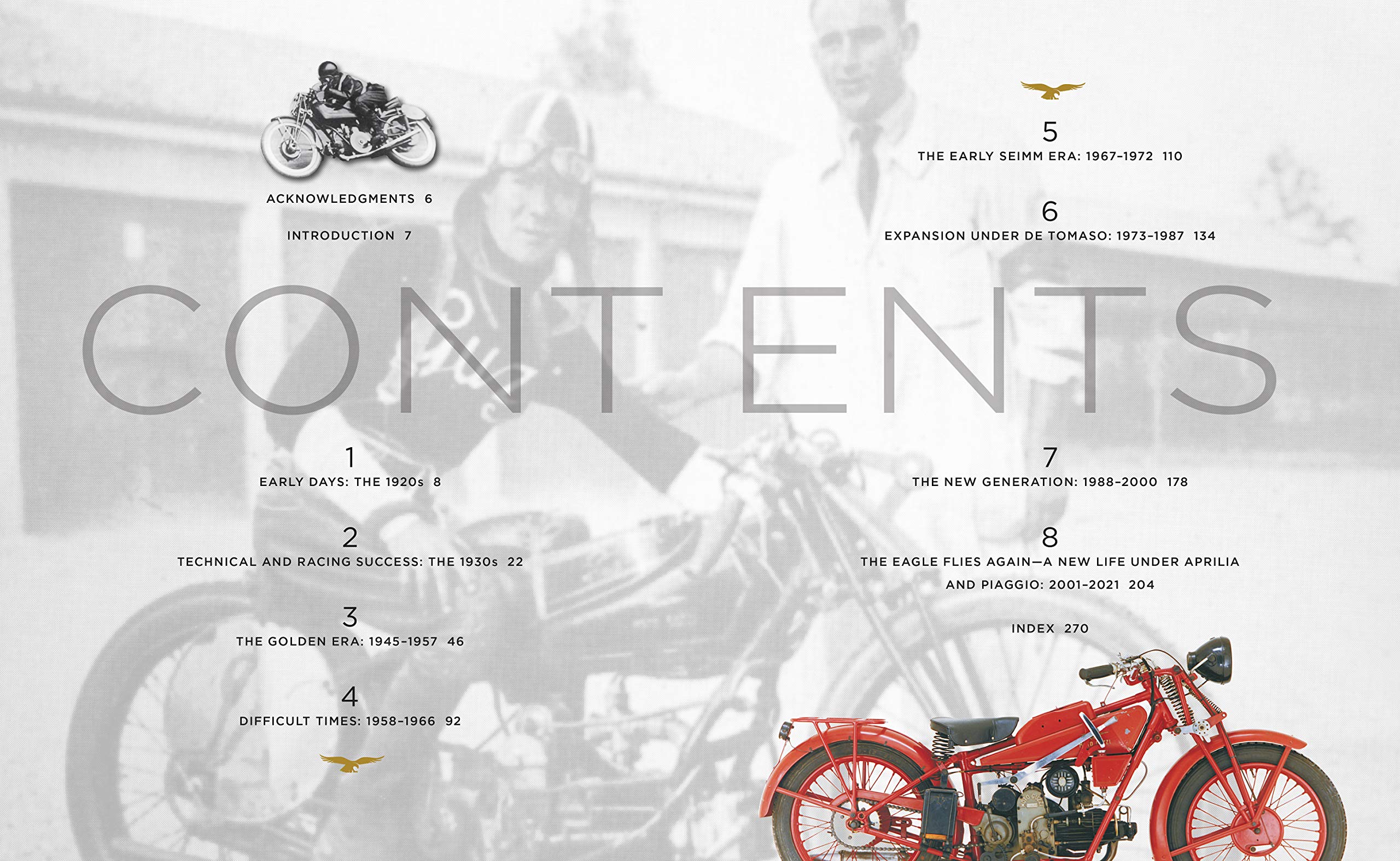 Its eight chapters follow the decades (roughly coinciding with specific eras of engine and model evolution), from ‘Early Days: the 1920s’ to ‘The Eagle Flies Again—A new Life Under Aprilia and Piaggio: 2001-2021.’ Along the way we’re treated to a detailed profile of every production motorcycle to come out of the Mandello del Lario factory (excepting some commercial, military and police-only models).

Founded by Carlo Guzzi and partners Giovanni Ravelli and Giorgio Parodi after WW I, Moto Guzzi’s first production bike was the 500cc single-cylinder “G.P.” Normale, with its signature outside flywheel (colloquially called the “salami slicer”). Falloon’s opening chapter offers a tantalizing entrée to the company’s start, and how Carlo Guzzi’s successful first engine design saw the company safely through the Depression and became the basis of ensuing Grand Prix racing success. 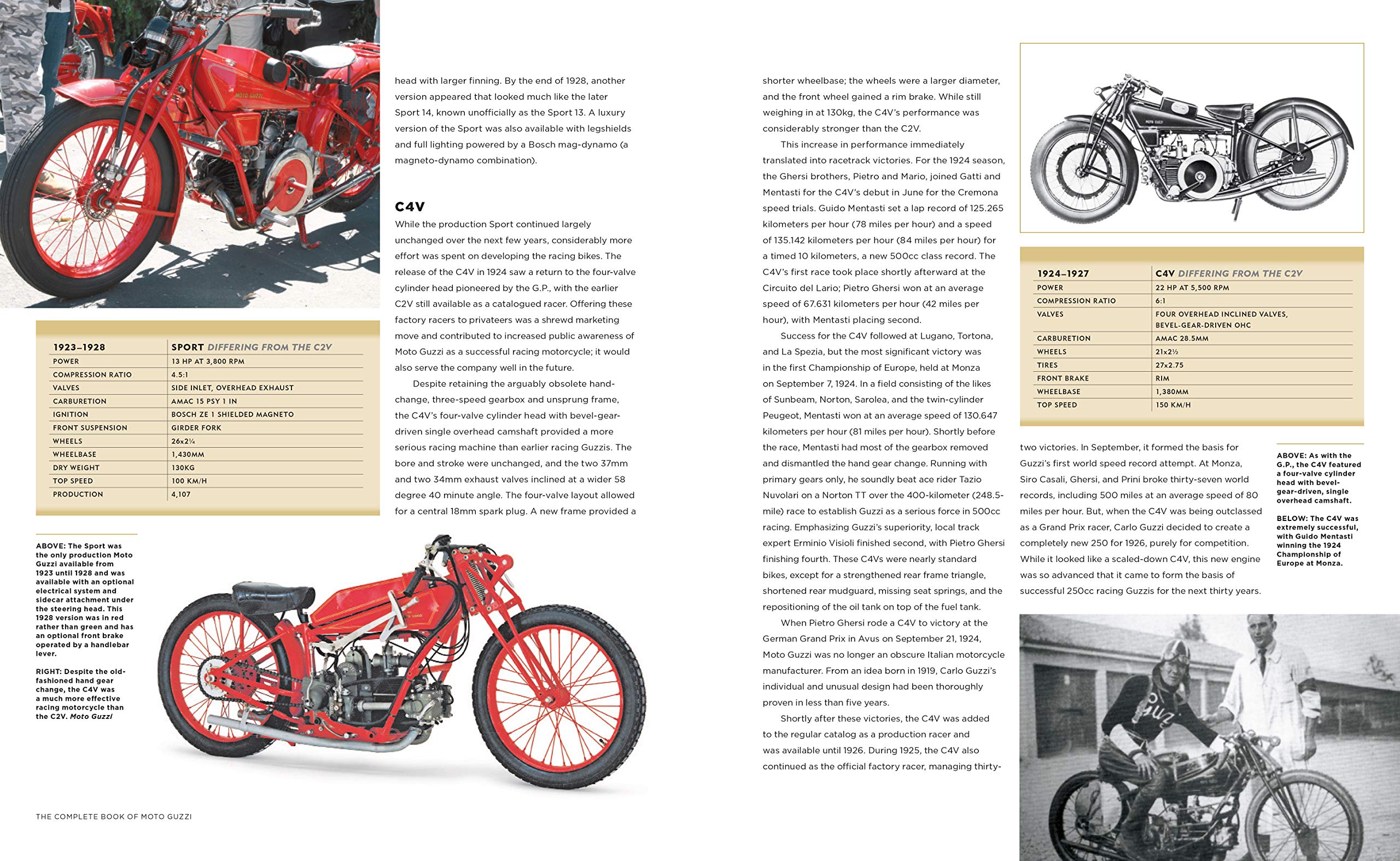 ‘The Golden Era: 1945-57’ takes us through the company’s tremendous post WWII success in racing, from its pre-war 42hp and 47hp (then 50hp) Bicilindricas through the innovative 500cc inline-four Quattro Cilindri to the indomitable 500cc V8 GP racer; plus more down-to-earth models such as the Airone, Astor, early Falcones, and the Galletto scooter.

The next decade was a struggle as Moto Guzzi battled to survive. In the chapter ‘Difficult Times: 1958-1966,’ Falloon profiles how in 1967 the company ended up in government receivership. Ironically, it was during this low period (when Moto Guzzi focused primarily on small-capacity motorcycles) that as a new company it developed the 90-degree, 700cc V-twin engine—the V7—with cylinders sticking out sideways and which has ever since been the iconic Moto Guzzi motor. Increased in 1969 to 750cc, it went on to win three world speed records at Monza that year (and also became very popular with police motorcycle divisions from California to Cuba). Since then the original ‘Ambassador’ has appeared in more than a hundred different V-twin versions, from 350cc to 1,400cc.

Falloon proceeds year by year, model by model, to map out Moto Guzzi’s resurgence under ownership of De Tomaso Industries (1973-1987; chapter 6), then Benelli (‘The New Generation: 1988-2000,’ chapter 7), and finally Aprilia and Piaggio, the automotive giant that acquired Aprilia in 2004 and is perhaps best known in the USA for making the Vespa (see my blogpost: Book Review: Vespa—Style & Passion). 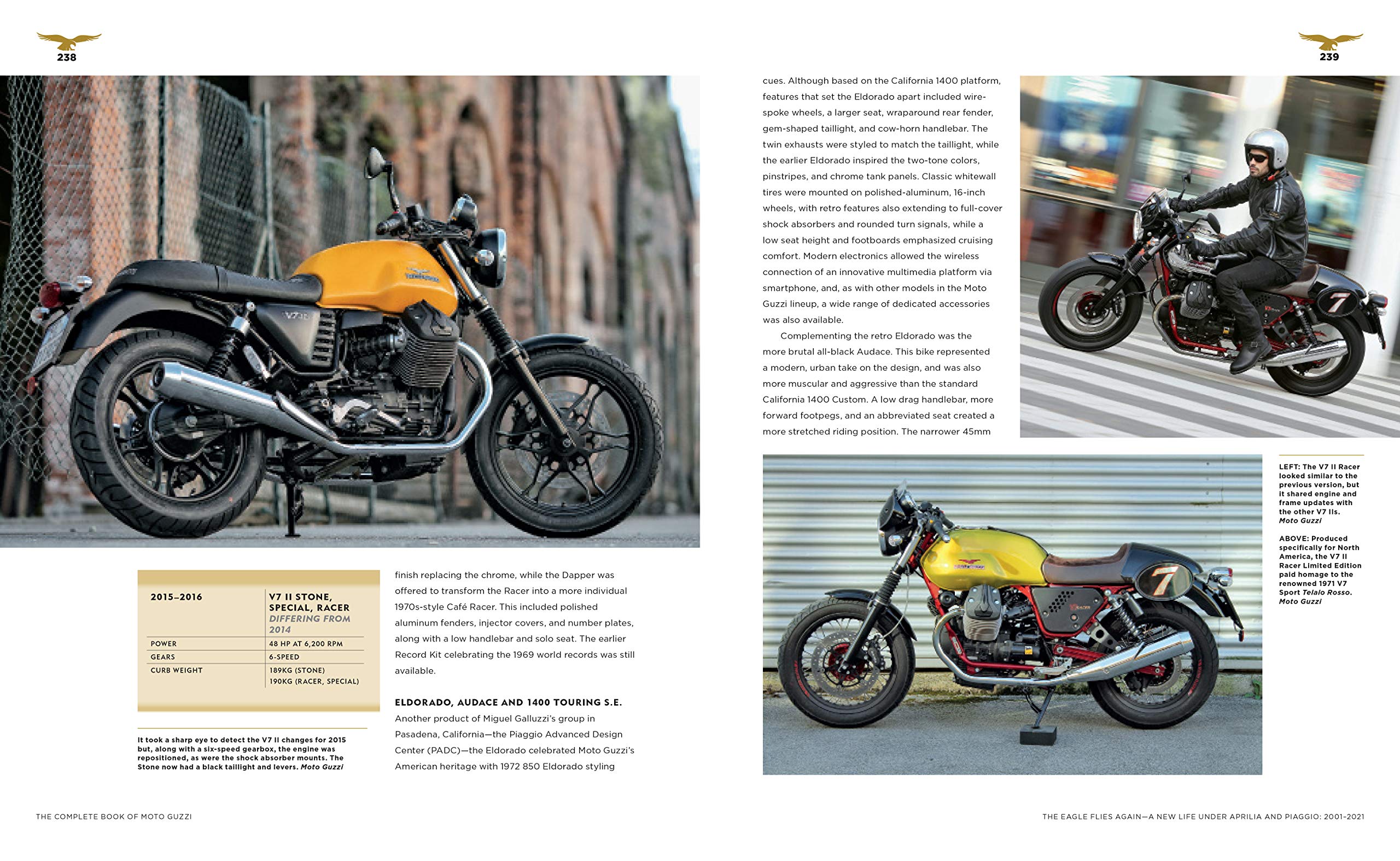 The last chapter is a true candy store treat. As are the dozens of models featured—proof, indeed, that Italians are the world’s masters at conjuring inanimate objects into beautiful and sensationally sexy machines to rival Federica Ridolfi. Running more than 60 pages, it profiles such stunners as the V11 Le Mans sport bike (2003)… the glamorous EV80 tourer (2003)… the jaw-dropping MGS-01 Corsa racer (2006)… the 107hp, 1200cc Stelvio NTX adventure tourer (2011)… the beyond-beautiful California 1400 Touring (2013-2017)… the V7 II six-speed racer… the futuristic MGX-21 with carbon-fiber covers and “batwing” fairing (2016)… through to such latest iterations as the state-of-the-art V85 TT Travel. 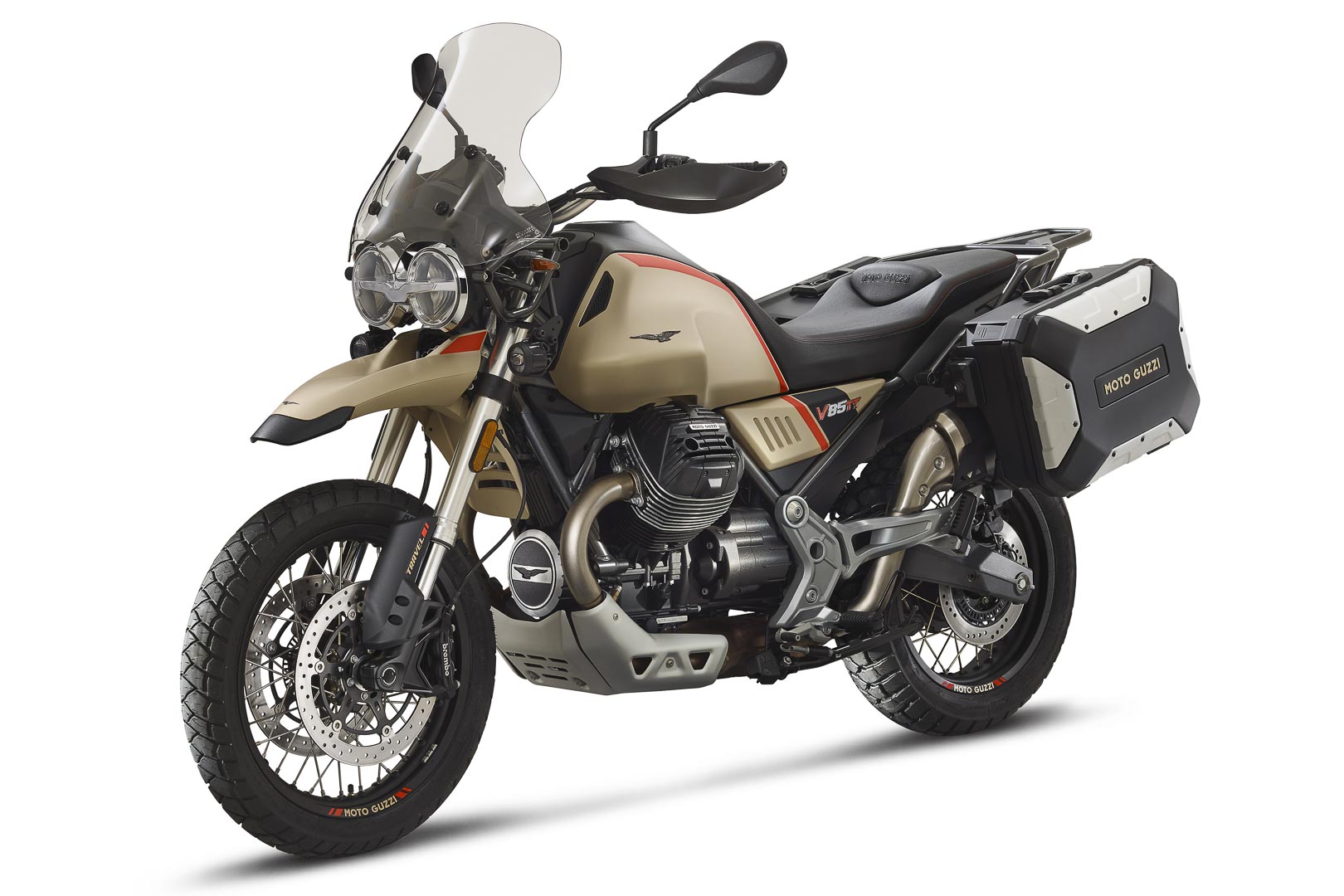 Every model is accompanied by a comprehensive technical data chart, plus gorgeous full-color photography.

I can’t think of a better Christmas gift to your best riding buddy… and yourself!