Just when you think it’s all been written about before with regard to Cuba, not one, but TWO new excellent, must-read books appear that deal new cards into the deck. (I’ll review the second in a separate post)

The first is The Corporation: An Epic Story of the Cuban American Underworld, by T.J. English… the organized-crime author of Havana Nocturne fame, about the Italian mob in pre-revolutionary Cuba. 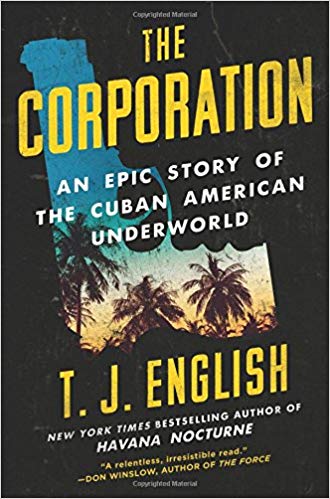 After Havana Nocturne was published in 2008, one question left in readers minds was, “So what happened to the U.S. and Cuban mobsters that were chased out of Cuba by Fidel Castro’s revolution?’”

We’re all familiar with the tale of the Italian Mafia, yet few people are aware that for decades, ending in the 1990s, the most bloodthirsty and powerful criminal enterprise in America was the Cuban Mob. Born of the Cuban-American exile community, and known as “”La Corporación” (The Corporation), this ruthless enterprise was led by José Miguel Battle, a former corrupt Havana cop and Bay of Pigs veteran nicknamed ‘El Padrino’—the Godfather. By the mid-1980s, The Corporation generated billions of dollars annually from the bolita (an illegal lottery played by millions of average citizens) and drugs, and ruled supreme among the violent criminal underworld in the United States.

English’s relentlessly cinematic read profiles how refugees became racketeers so ruthless that their harrowing deeds make Don Corleone, and pre-revolutionary Havana’s mob bosses, Meyer Lansky and Santo Traficante, look like a bunch of angels. The blood-soaked story, in fact, leaves an immense distaste for the exiled Cuban-American community of Florida and New Jersey. And not simply for their swaggering power (still poisoning Cuba-U.S. relations), nor the sheer brutality of The Corporation…

As with everything to do with Cuba, you can’t get away from the politics!

T.J. English’s masterful investigative journalism about Battle, The Corporation, and Miami-Dade Detective Dave Shanks’ obsession with taking them down, is set against the larger backdrop of the Cuban Revolution, the efforts to assassinate Fidel Castro and take back Cuba, and violent, vehemently anti-Castro Cuban exile Miami/New Jersey politics.

“This is such an epic story. It’s kind of like the Godfather I and II together, and in some ways even better, because it has this political context to it,” says English. “The most surprising piece of information in writing this book was the full extent of the relationship between the Cuban exile anti-Castro movement and the CIA. The Cuban-American exile community was used by the CIA to do all kinds of dirty political deeds. So it was a campaign of terror.”

“A lot of these old-school, hard-core Cubans started talking to us, and that’s what broke it open for T.J.,” says José Miguel Freixas, a film scholar whose unpublished manuscript, written with Shanks, became the basis for English’s book. “We talked to hit men, to complete psychopaths, to dirty cops. We unlocked that Pandora’s box of almost forty sources.”

The suspenseful narrative makes an irresistible read. It’s no wonder that The Corporation is in development as a major motion picture, with Benicio Del Toro set to play Battle.