In 1946, airplane manufacturer Enrico Piaggio took one look at the elegantly minimalist prototype scooter with a rounded and tapered rear end that his aeronautic engineer– Corradino d’Ascanio—had designed and exclaimed: “It looks like a wasp!” Thus, the Vespa was born.

More than 160 “Vesponi” (big-frame) and “Vespini” (small-frame) models, and 19 million scooters, later the Vespa’s unmistakably waspish lines are as instantly recognizable and quintessentially Italian as Sophia Loren or Alfa Romeo.

Fittingly, this legendary scooter’s 75-year anniversary is being celebrated by Vespa: Style and Passion (Motorbooks, September 2020), a lavishly illustrated coffee-table book and the official history of the iconic marque. 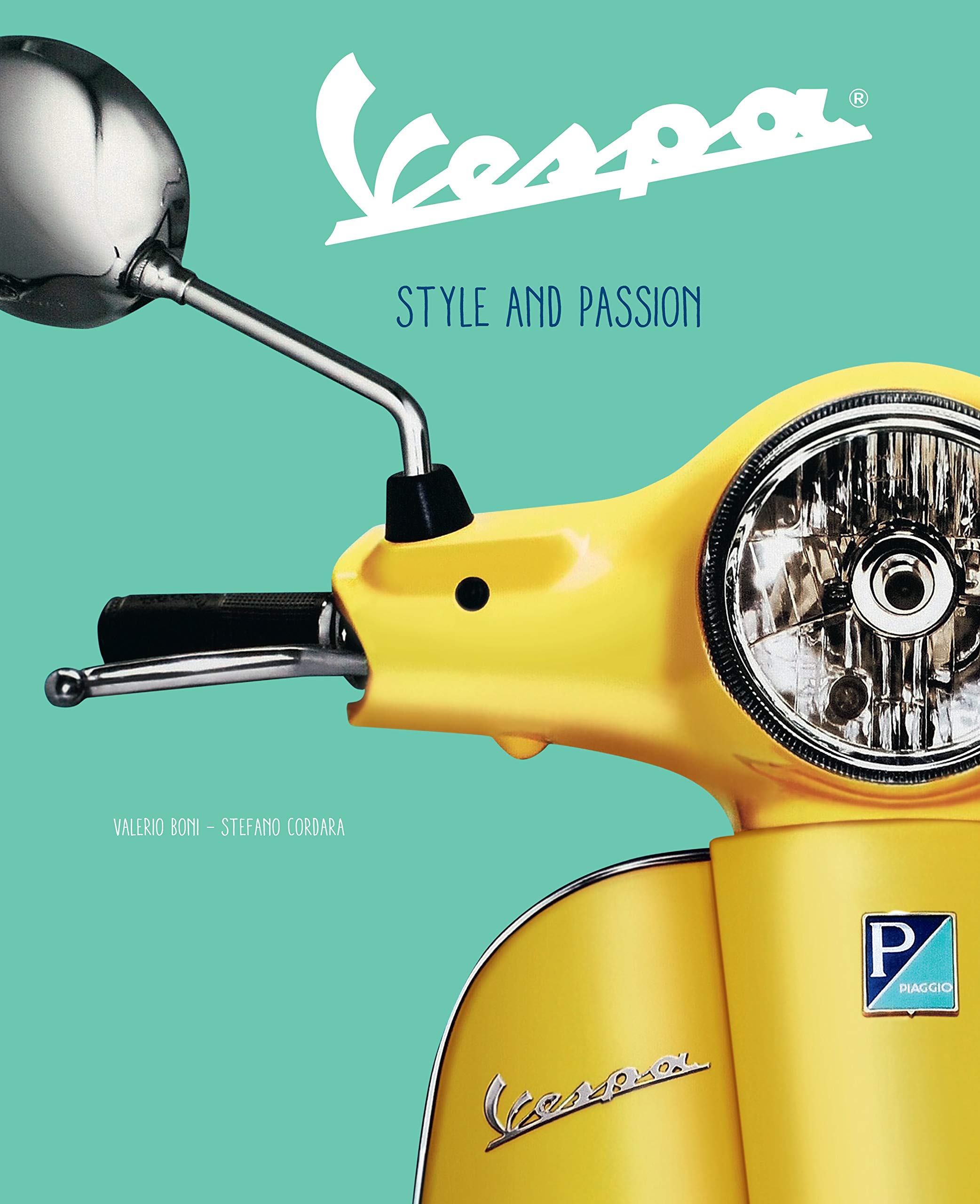 This gorgeous 224-page, large format (12”x10”) compendium by Italian moto-journalists Valerio Boni and Stefano Cordara spans the spectrum in three chapters featuring 250 color and black & white photos, design diagrams, and illustrations. Chapter One profiles the history of the Piaggio company, from its origins in 1884 as a ship furniture manufacturer to today’s status as the maker of Vespa, Aprilia, Moto Guzzis, and other two-wheel (and three-wheel) motorcycle marques.

Chapter Two tells the tale of the Vespa’s birth and evolution, from the first prototype that led to production of the timeless 98cc Vespa 98 in 1946, to the 2018 Vespa Elettrica with hybrid motor and a multimedia electronics platform. 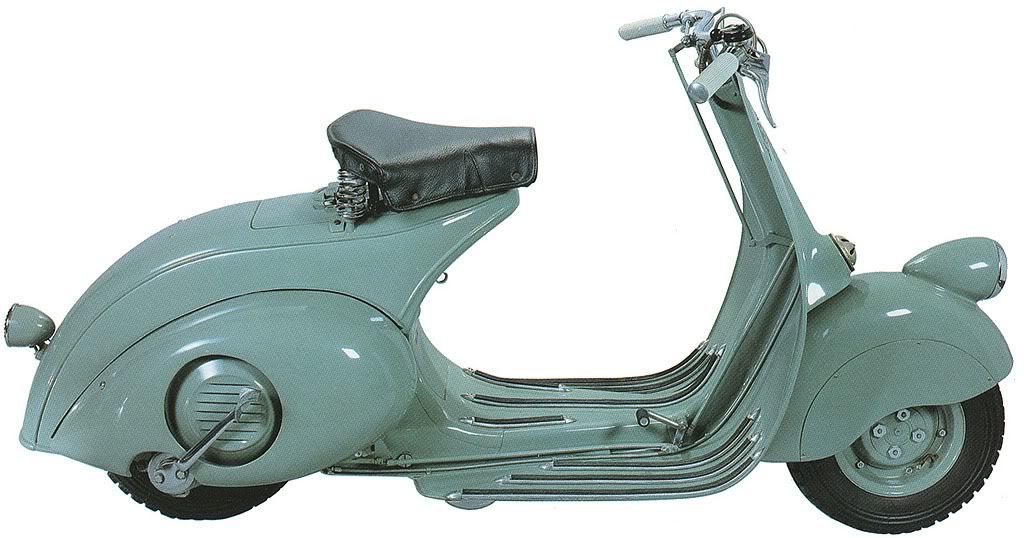 Scrolling through Chapter Two is a true trip through time.

The core of the book is “The Models that Shaped History”—a full 100 pages dedicated to in-depth portraits of 39 Vespa models that left their mark: The Vespa 125 Flessible that launched Vespa to international fame in the 1953 romantic comedy Roman Holiday with Gregory Peck and Audrey Hepburn… The Vespa 180 Rally (1968-1973), the classically rounded first choice of many 16-year-olds of my generation in England (I owned a Lambretta)… The Vespa 200 Rally (1972-1979), the first model to have an electronic starter and a 200cc motor offering truly sporty performance (maximum speed of 62 mph), and the last model made entirely of sheet metal with no plastic parts… Plus various models of the beloved PX series—still the choice ride for millions of riders worldwide (3 million were sold 1998-2017, making it the single most successful model in Piaggio’s history). 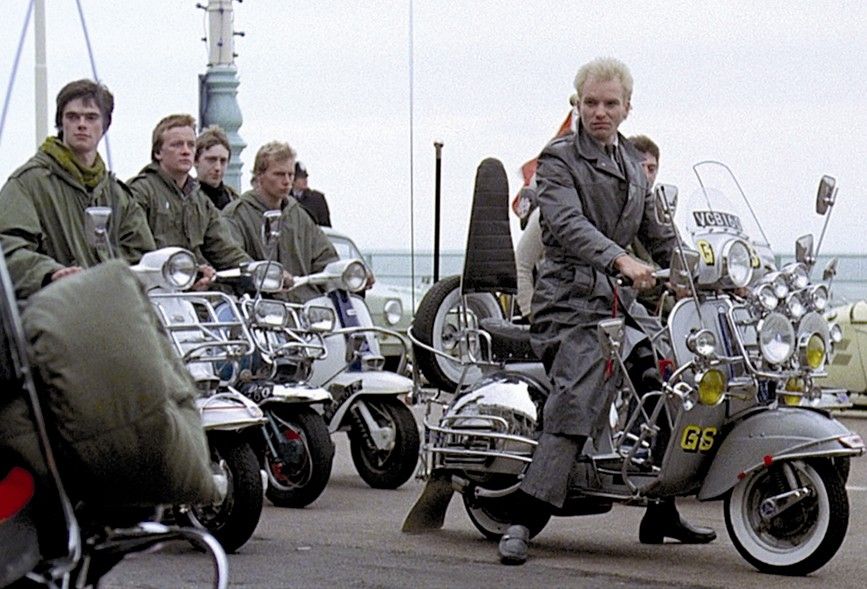 This chapter also features “Vespa’s Advertising and Communications.” Those, like myself, who grew up with Mod culture (with its Lambrettas and Vespas, each ridiculously customized with a million mirrors) will appreciate the book’s tip of the hat to the English scooter-riding youth subculture portrayed most famously in Quadraphenia, starring Sting. In fact, the Vespa became so engrained in English culture that “bobbies” even rode them… 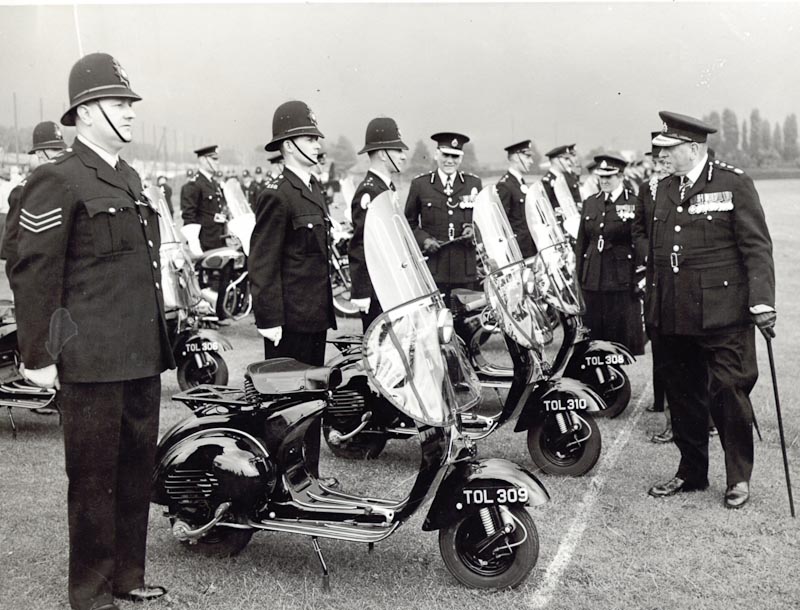 Plus, we’re treated to several decades of predominantly Playboy-esque, or Pirelli-mild, advertising, including the annual stiletto-heeled Piaggio calendar. In the 1970s and 1980s, bikini babes draped over Vespas left no doubt that the scooter was sexy. 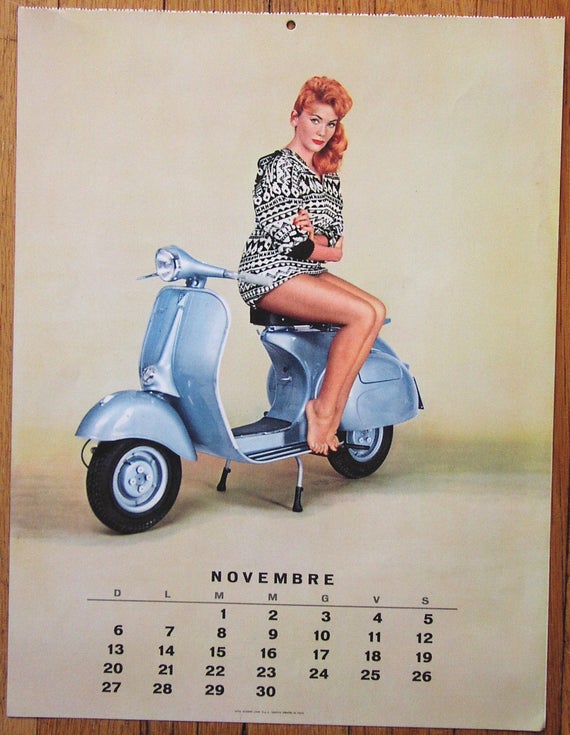 Chapter Three—”The Vespa Style”—is dedicated to the culture the icon has inspired, from the movies to the world of fashion. Audrey Hepburn and Gregory Peck were the first in a long line of famous actors and actresses—from Brigitte Bardot and Jayne Mansfield to Antonio Banderas, Matt Damon, and Nicole Kidman—who’ve been filmed astride the saddle of the world’s best-selling scooter. (Forbes magazine quipped: “That 1954 Oscar for the splendid Audrey Hepburn should have gone to the other ‘female star’. While Gregory Peck was courting Hepburn, the whole world fell in love with the metallic green Vespa 125.”) As you’d expect, Vespa also got star billing along Lambretta in Quadrophenia. But the cameo star has been a prop in hundreds of movies, from American Graffiti to Zoolander 2. 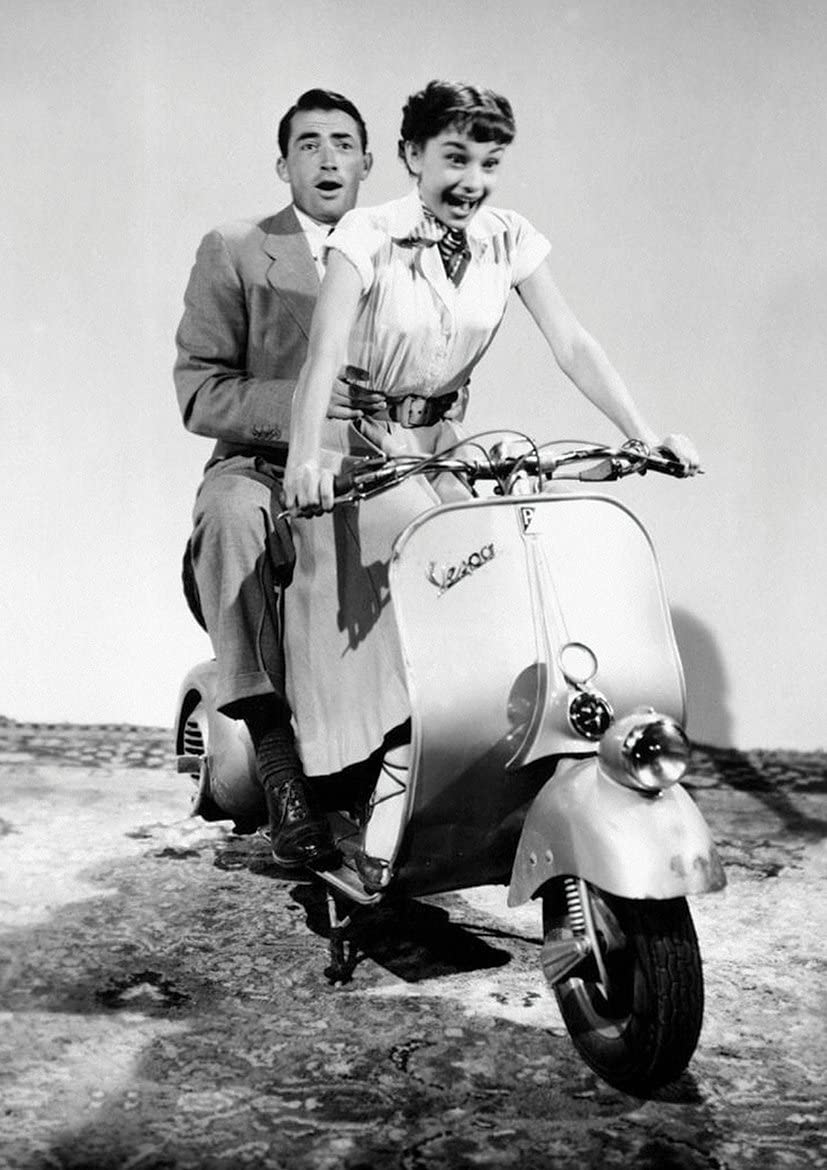 Gregory… what are you doing back there? Audrey looks, er… thrilled!

Chapter Three’s “Rallies, Records and Races” profiles 75 years of record-setting racing adventures, from speed trials and hill-climbs to, unbelievably, the Paris-Dakar Rally. Yes, in 1980, two Vespa PX 200E scooters crossed the Sahara Desert—and the finish line–on the most arduous motor race in the world. The French team of four Vespas was led by Jean-Francois Piot. Considering that only 81 out of 219 starter vehicles crossed the finish line, the team’s 50-percent success suggests that if you’re planning on tackling the Dakar rally, doing it on a Vespa may be as good a choice as any… although you’ll most likely finish last!

Older two-stroke Vespa models such as the PX 200E are far more suited to proper off-roading than the heavier modern 4-strokes. There’s an entire sport, VespaCross, devoted to chucking these irresponsibly fast barstools through mud and gravel. Vespas will even compete in the NORRA Mexican 1000 down the length of the Baja Peninsula in November 2020, Covid-19 pandemic permitting. (In 2015, I broke my leg in five places while riding a BMW R1200GSA off-road in Baja. Let me tell you, it’s rugged!) 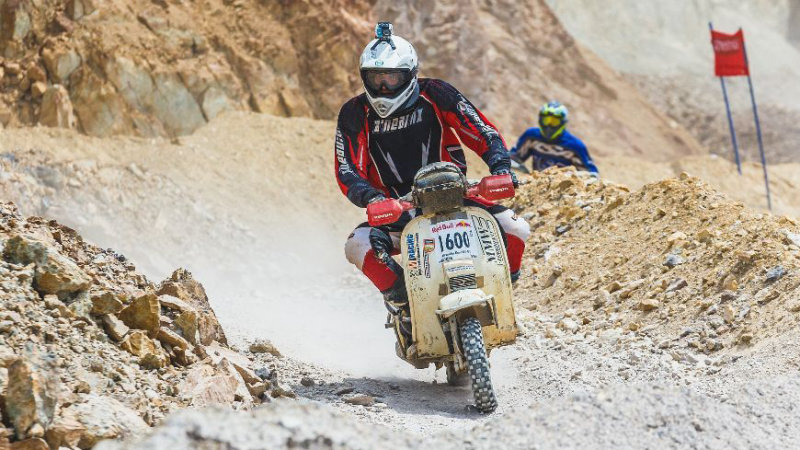 As a moto-journalist specializing in adventure touring, my favorite part of the book, however, is “Around the World on a Vespa.” It’s amazing how many folks have ridden scooters designed for city traffic on trans-continental and RTW journeys. As early as 1948, Giuseppe Morandi rode 6,000 km around North Africa on a Vespa 125 Elastico, while Frenchman Pierre Delliere rode his Vespa from Paris to Saigon in 51 days. English peripatetic Betty Warral rode a Vespa from London to Australia and back. And Oz’s own Geoff Dean was the first adventurer to complete a round-the-world tour on a Vespa, while Italian journalist Giorgio Bettinelli clocked up 250,000 km during five years spent roaming the globe.

The tradition continues, of course. In 2013, Stergios Gogos set off from Greece to tour the world on a Vespa PX200 named Kitsos (“Donkey”). In the Democratic Republic of Congo he met Alexandra Fefopoulou. Something clicked. She hopped aboard for a two-up “test-ride.” Seven years later they’re still going strong (as is Kitsos) on their RTW journey aboard the official worldvespa vehicle. 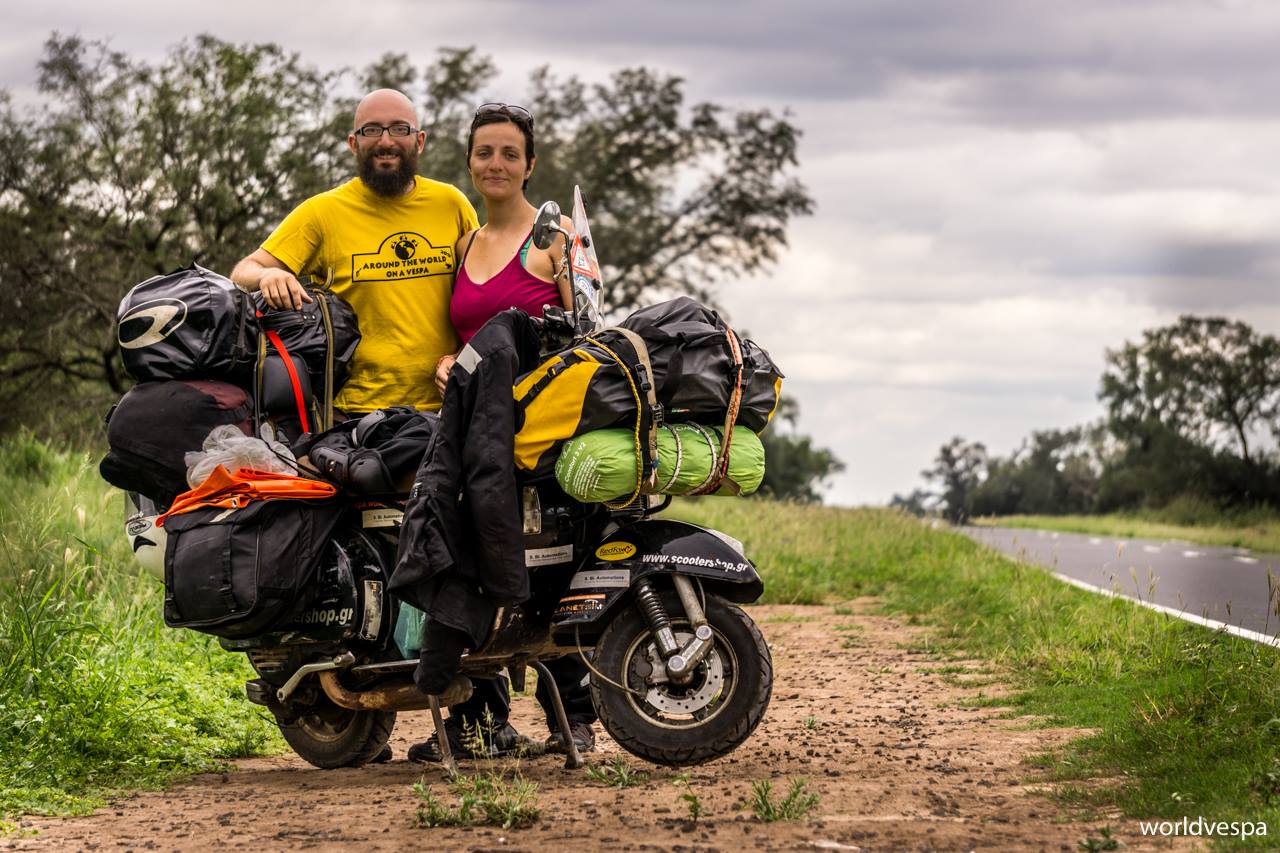 Proof indeed that the Vespa is a justifiably admired icon of timeless functionality and sexy design. And Vespa: Style and Passion is the ultimate retrospective of this beloved brand.

READ MY STORY ABOUT SCOOTERING AROUND CROATIA ON A VESPA!