“We stand with the Cuban people,” President Biden said in a statement on Monday in response to the unprecedented street protests in Cuba, citing what he called “decades of economic suffering to which they have been subjected by Cuba’s authoritarian regime.” Biden called the protests a “clarion call for freedom” while praising the Cubans who took to the streets to protest food shortages and high prices.

Let’s be perfectly clear… this is hypocrisy. 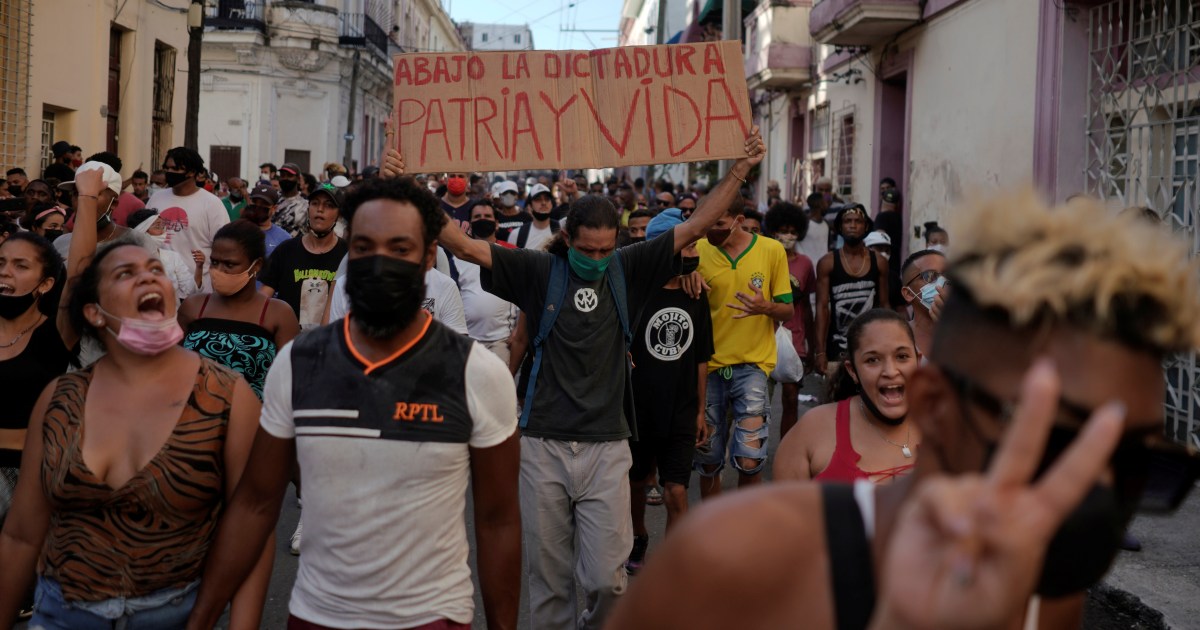 We all understand that the Cuban government has ineptly mismanaged its economy, and that it is repressive of freedom of political expression, and of Cuban entrepreneurs’ abilities to achieve their potential, That’s a given! And we want that to change.

Nonetheless, Cuba has also uniquely been subjected for six decades to a far-reaching U.S. embargo designed to thwart international trade with Cuba and strangle her economy to the point that exactly this kind of protest would erupt. (Obviously, an active attempt at destabilization by a foreign power is not an environment in which freedom of expression is likely to be allowed to thrive.)

An all-encompassing embargo, by the way, significantly tightened by Trump, who even banned Cuban-Americans from sending money to aid their families in Cuba. That’s an estimated $3 billion per year now denied to Cuban individuals on the island! So many Cubans who have become depending on family money find themselves unable to afford what food is in the stores… which are threadbare, as the Cuban government now lacks the money to buy food imports following a catastrophic fall in tourism due to Covid.

As to White House press secretary Jen Psaki’s remark that protestors were also “voicing concern about lack of access to vaccines,” that the U.S. is “ready to assist Cuba in its COVID-19 vaccination effort,” and that “we have to determine what the mechanism would be to work with the Cuban people to get vaccines to them”… this, too, is gross misrepresentation of reality. 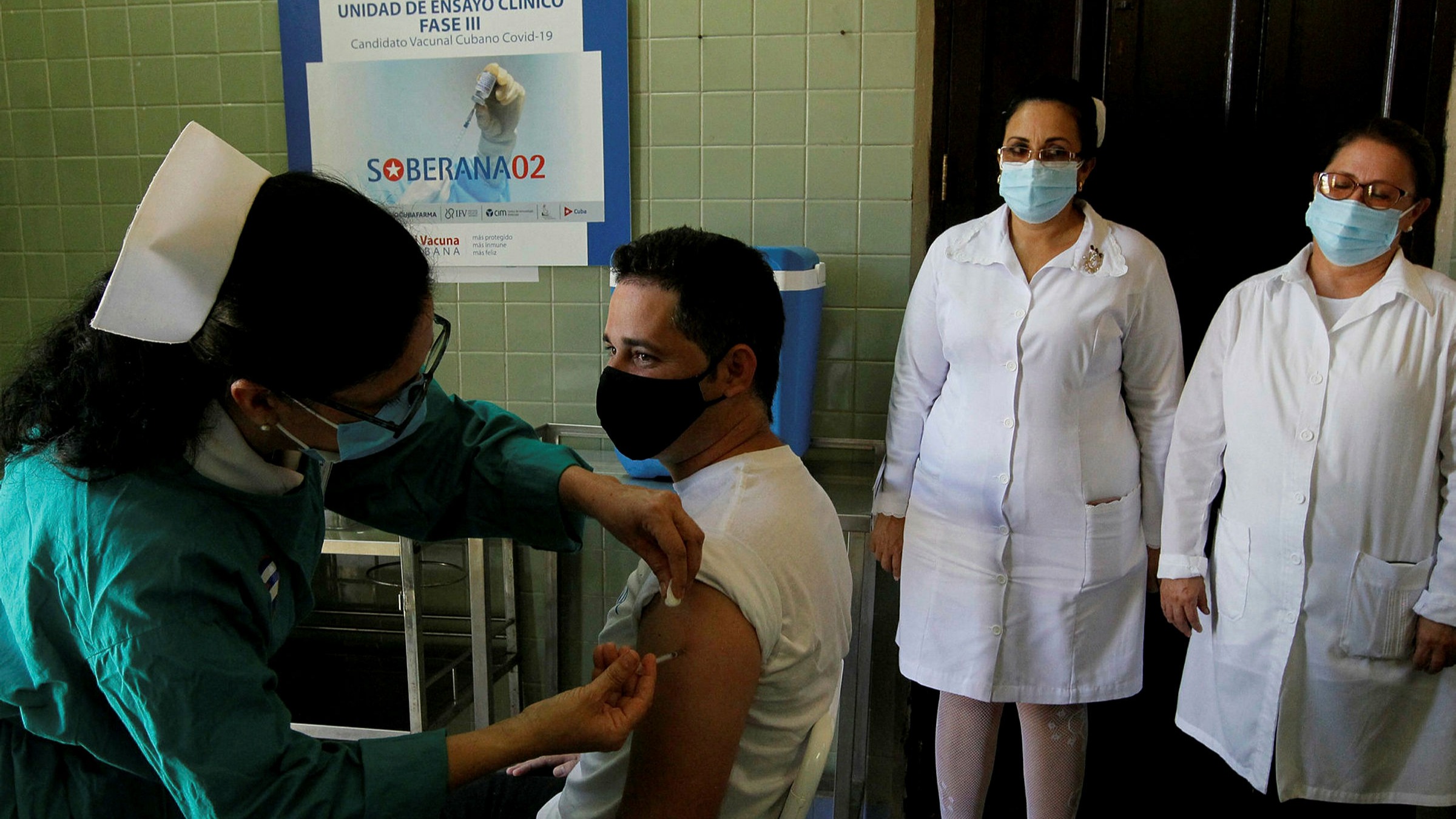 Cuba has no need of U.S. vaccines!

It has developed two Covid vaccines of its own—Soberana and Abdala—and is rapidly moving to inoculate the entire population. As of July 15, it had fully vaccinated 17 percent of the population. (Having successfully held Covid cases in check for 15 months, two months ago cases began to spike and Covid is now ravaging certain sectors of Cuba, where medicines are now in short supply.) What Cuba needs are syringes.

If the USA was sincere in its desire to help, the charitable foundation Global Health Partners wouldn’t need to be seeking urgent donations to purchase syringes for Cuba (and to have needed to obtain legal permission from the U.S. Treasury to do so). Moreover, when in April 2020, Chinese billionaire Jack Ma sent a shipment of coronavirus aid to Cuba (including ventilators, diagnostic kits, etc.) Colombia-based Avianca Airlines was forced to refuse the cargo due to the U.S. embargo simply because a major shareholder is American.

Meanwhile, as Reuters reported on September 24, 2019, “The U.S. Treasury Department on Tuesday imposed sanctions on four maritime firms and vessels transporting Venezuelan oil to Cuba, amid an acute fuel scarcity in the island that is forcing people to line up for gasoline and public transport.” One was a Cyprus company; the other three were Panamanian. Thereafter, the world’s other shipping companies got the message to steer clear.

Such is the long reach of the U.S. embargo! 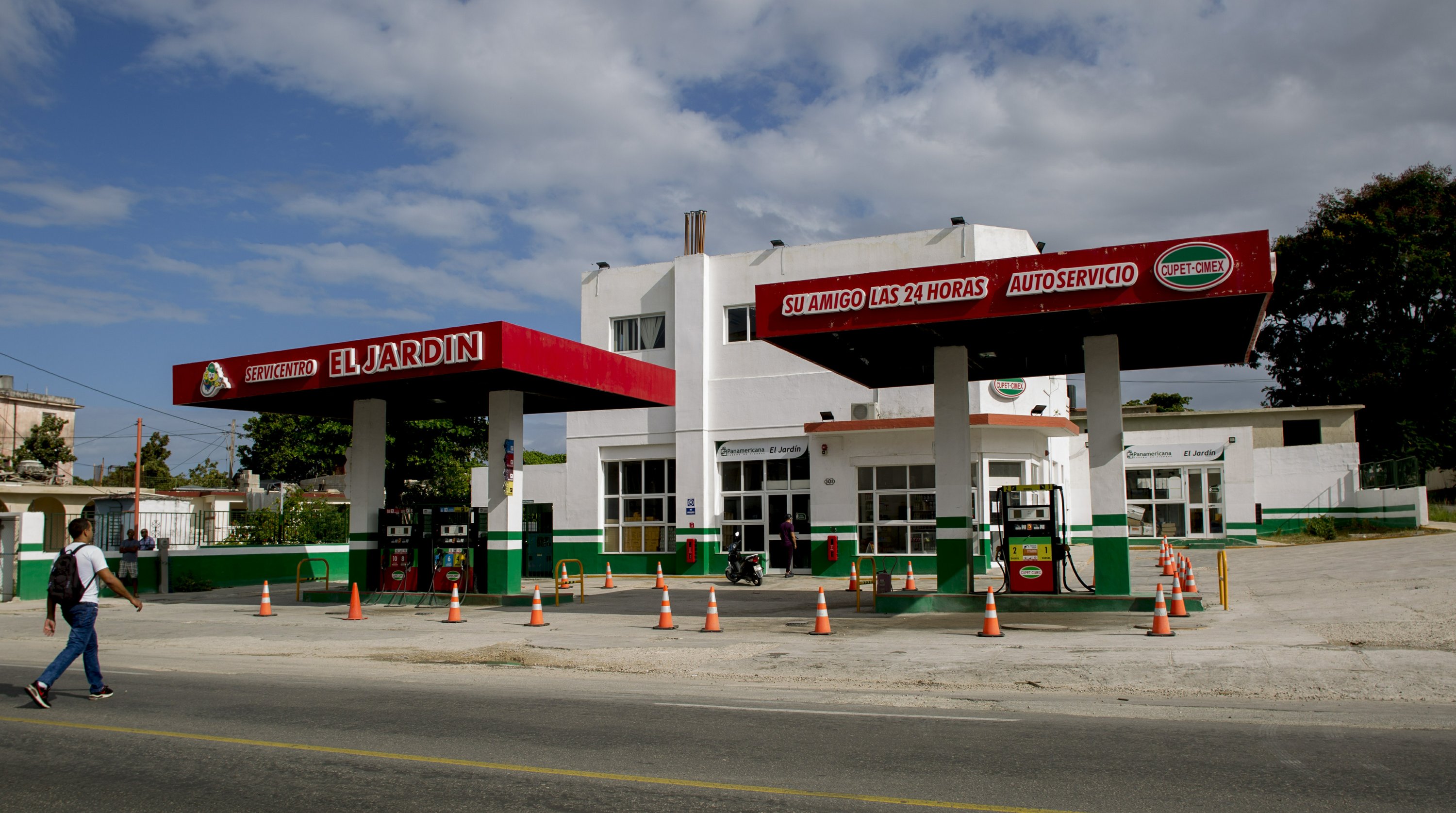 For this reason, stop blaming Cuba when it can’t operate its tractors and fuel-delivery trucks for want of fuel (as I saw for myself while motorcycling through Cuba in 1996 in the wake of the collapse of the Soviet Union), when the U.S. embargo punishes whoever tries to supply oil to Cuba. In this light, the food shortages are as much a result of the U.S. embargo as the Cuban government’s dismal economic mismanagement.

That the embargo is indeed “working” by adding to Cubans’ deprivations fills Florida’s (and New Jersey’s) rabidly anti-Castroite Cuban-American exile community with glee. For them, anyone who has not left Cuba is by default a supporter of the government. The exiles have no sympathy for their plight… indeed, they desire to see the Cubans suffer in the hope that it will lead to violent overthrow of the government. Since Cuba’s governmental elite live a privileged life in Cuba and is relatively unaffected by the embargo, which instead hugely impacts the average Cuban, there is simply no other way of objectively analyzing the Cuban-Americans’ fervid support for the embargo.

Lest we forget, Trump banned family remittances at the behest of the Cuban-American hard-liners, who detest the less ideologically rigid Cuban-Americans who send the money, visit their families in Cuba, and have even invested in the burgeoning private enterprises permitted under Raúl Castro.

That’s why the streets outside Miami’s Versailles restaurant saw mobs of Cuban-Americans dancing in the street in delight. And it is because of their voting power in Florida (a swing state) and in Congress (pro-embargo “Democratic” Senator Bob Menéndez is Chairman of the Senate Foreign Relations Committee… and need I mention Senator Marco Rubio) that we still have a U.S. embargo!

It’s also why President Biden is caught between a rock and a hard place.

I’d like to think in his heart that he wants to return to the Obama years, in which the Cuban people prospered based on–finally!–the freedom of U.S. citizens to travel more-or-less unrestricted to Cuba. Private businesses throughout Cuba blossomed and prospered, aided by investment using a massive increase in family remittances from Florida thanks to Obama and by the massive increase in dollars spent by U.S. visitors in private restaurants, B&Bs, etc.. Many Cubans began to thrive for the first time in decades, and the trickle-down from one business to another was palpable.

In response, the Cuban government lightened up, and Internet access, cellphone service, and yes, even more freedom of critical expression was allowed. (No more proof is needed that engagement works to the benefit of the average Cuban.)

But Biden lost Florida to Trump in November, 2020, after being portrayed as a “socialist.” Cuban-Americans were the key vote. 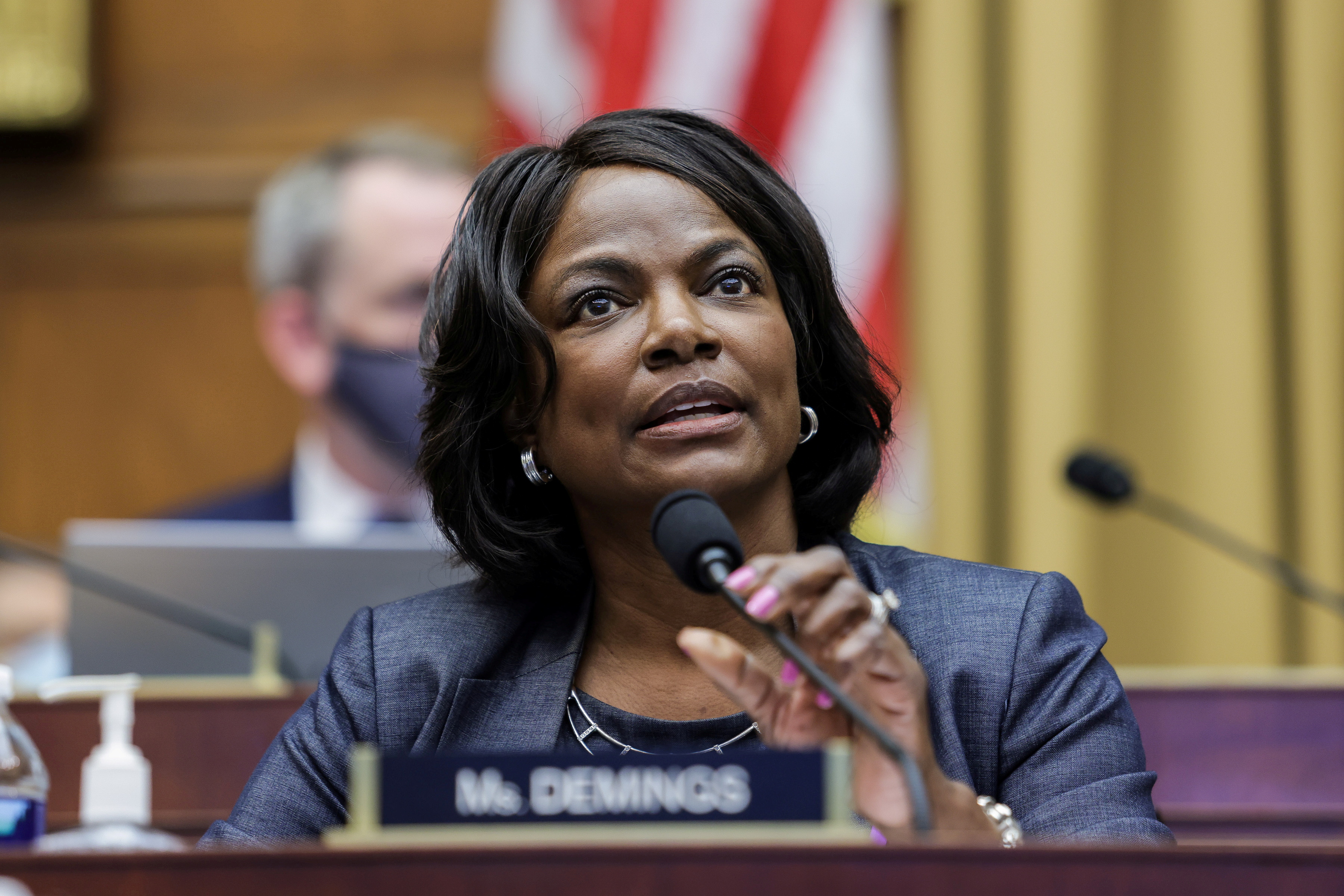 Biden correctly fears that reverting to Obama’s policy will be viewed as these key swing Cuban-American voters as going “soft” on the Cuban government. With Rep. Val Demings contesting Marco Rubio for the Senate seat in the 2022 mid-terms, the president feels the need to stick to Trump’s hard line if she is to win. “Rubio out/Demings in” is a seismic game-changer in the Senate and the U.S. political landscape!

Meanwhile, it’s the Cubans on the island who continue to pay the price for this cynical policy.

That’s why on June 23, 2021, the United Nations voted for the 29th consecutive year to condemn the unilateral U.S. embargo on Cuba, with only Israel siding with the USA in a 184:2 vote.

President Biden… if you sincerely believe in “freedom” for the Cuban people, then lift this obscene embargo and give them the freedom to receive money from families abroad, freedom to receive oil, medical aid, and other goods currently banned under U.S. law, and freedom to receive U.S. travelers without restriction. They can then become once again the more prosperous and forceful advocates for reform within Cuba’s political and economic system that we saw during the Obama era.

To do otherwise is merely to show a callous and hypocritical disregard for the Cubans’ welfare, reminding me yet again of Machiavelli’s dictum regarding the counsel of exiles:

It ought to be considered, therefore, how vain are the faith and promises of those who find themselves deprived of their country… [S]uch is the extreme desire in them to return home, that they naturally believe many things that are false and add many others by art, so that between those they believe and those they say they believe, they fill you with hope, so that relying on them you will incur expenses in vain, or you undertake an enterprise in which you ruin yourself. A Prince, therefore, ought to go slowly in undertaking an enterprise upon the representations of an exile, for most of the times he will be left either with shame or very grave injury.”

One who should know is Max Lesnik.

Head of a clandestine organization in Havana and a member of the Second Front of the Escambray during the Cuban Revolution, Lesnik later soured of Fidel when he turned communist and fled to Miami. Today a vocal critic of the U.S. embargo and the Cuban-American hard-liners and their covert warfare to bring down the Cuban government, he calls Miami a place “where terrorists are heroes” and “political assassination is regarded as heroic.” (He should know about that too: he has been the target of several assassination attempts for his views.) 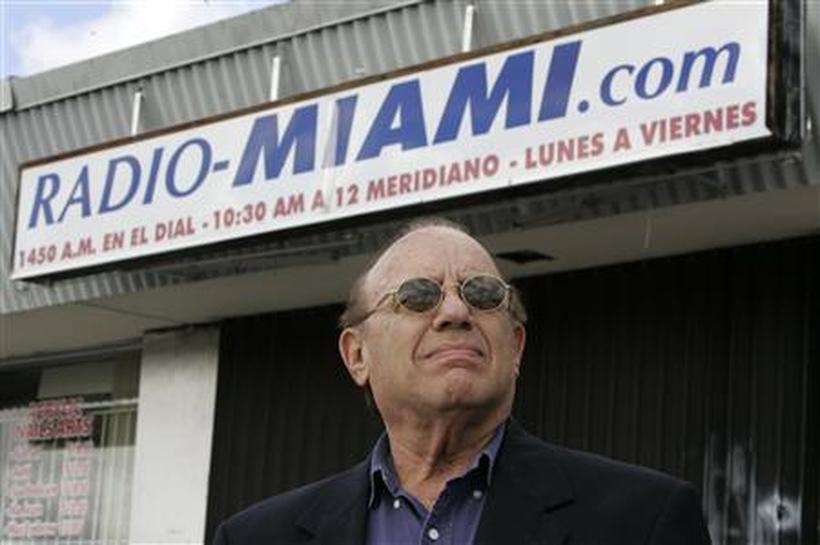 Regarding the recent protests, Lesnik said this on Radio Miami: “Any person with two fingers in front knows perfectly well that the ‘staging’ of the failed ‘Revolución de Colores’ orchestrated in several cities of the island was done by Cubans from South Florida, experts in the management of the Internet, all of them paid by the USAID Agency of the United States government.”

Perhaps… Despite which, I know from my 28 years visiting the island that the Cubans’ frustrations are very real and run deep. It is divided between those who detest the current government (or at the very least are tired of it) and long for change, and those who are thankful for what the Revolution has given them and stay loyal.

Either way, Lesnik is correct when he adds that it is only by ending the embargo that the United States can help open the door to real change in Cuba. 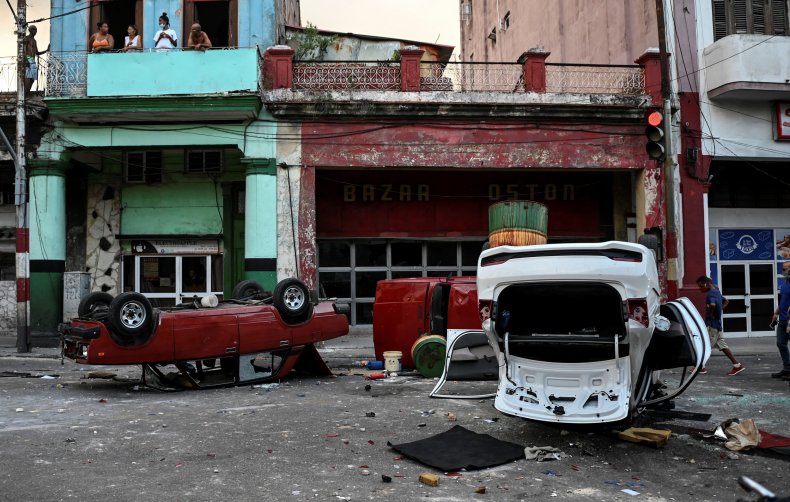