Sometimes death is a relief and a blessing. This morning, my dear and cherished friend Ralph G. Martell passed away after a long battle with cancer. It is an understatement to say that he truly was a remarkable man. Author… Bon vivant… Restaurateur… World traveler… Friend to a coterie of the rich and famous. In all, a personaje—a personality–as the Cubans would say.

Our own friendship seems just as remarkable, given that I met him only one time… in 1995 during the Havana Jazz Festival. We spent many fun times together during that brief week in Cuba, not least as he and I explored Havana with my then-girlfriend Daisy, as regaled in his book, Never Stop Dancing (1996):

“The next day I had arranged with my friends Christopher and Daisy to share a car and driver and go see Hemingway’s home. While waiting for them in the lobby, an attractive Cuban woman I presumed to be in her mid-forties approached me and asked if I were the American writer and I said yes, nearly blushing.

Her name was Silvia González Guerra. She presented her card and underneath her name it said autor musical. Among other talents she was a composer. We had a lengthy and interesting conversation and she gave me a cassette titled Bienvenido a Cuba Bella. Two of the recorded songs were hers. She recommended a driver with a car and we set out for Poppa Hemingway’s home. We played Silvia’s tape along the way. It was very romantic…

After lunch I photographed a bronze bust of Hemingway near the bar. I asked Daisy to put her black hand with an assortment of silver rings at the base and it turned out to be a very striking photograph. We were all full from our lunches and decided to walk around the town. I wanted to be alone and suspected Christopher and Daisy felt the same.” 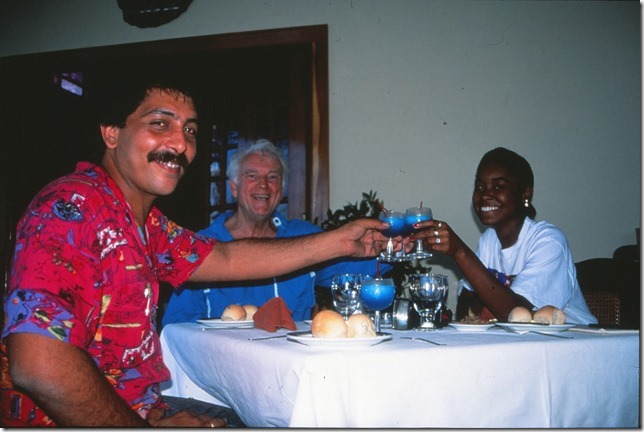 Although this was my fifth or sixth visit to Cuba, beginning in 1993, Ralph had first visited the city before the Revolution, when Hemingway still lived there. He subsequently resurrected his visits to Cuba in 1992. Like myself a dedicated cubaphile, he would return many times more. His numerous adventures, many of them amorous, were regaled fondly, unabashed and often in intimate detail, in such subsequent books as Gardenias and Stars (1999) and Havana Con Alma (2003), the latter a magnificent tribute to the many legendary Cuban musicians who became Ralph’s close friends (Chucho Valdes, Omara Porfuondo, Ruben González, among others). Many such introductions were initiated by songwriter Silvia González Guerra, who also played encourager and mischievous mentor for his many romantic trysts. (During the Havana Jazz Festival, Ralph and I got together with multi-Grammy award-winning pianist Chucho Valdes. I’d put my back out and somewhere I have a photo taken by Ralph of Chucho and I with our arms over each others shoulder, with me bent over like Quasimodo… a painful circumstance made more comic by the fact that Chucho towers well over six feet tall.)

One of the most thoughtful and compassionate of human beings, Ralph was the definitive letter writer, and romantic trysts were an amusing and consistent theme. And he never failed to send me a Christmas card… often of his snowbound lakeside home but, in earlier days, typically of him riding through Havana in a classic convertible.

I much regret not having kept the scores of handwritten missives I received, usually accompanied by photos of some recent much younger flame, or his beloved home by the lake in New York’s Adirondack Mountains, or Ralph proudly holding aloft a trout he’d just caught. A devout freethinker like myself, he would often enclose copies of Freethought Today. At other times a list of jokes, for he was always a radiant, jovial jester at heart.

His personal story is quite remarkable, not simply as a perpetual globe-spanning peripatetic. He led an inordinately colorful life!

He is, perhaps, most famously recalled as the owner of Martell’s, “the” place to sup and dine on New York’s Upper East Side. Robert Redford was a regular. Jacqueline Kennedy came with Caroline, and Brooke Shields, as a child, often came with her mother. The Beatles, Peter O’Toole, Dustin Hoffman, Shelley Winters were often in attendance; Dick Cavett had a birthday party there. And Stan Getz “hung out” at Martell’s, where several movies and TV commercials were filmed. (I recall Ralph telling me how he used to loan his New York apartment to Stan Getz to comsummate his secret love affair with Brazilian bossa-nova star Joao Gilberto’s wife, Astrud!) And no wonder. For Ralph was someone you wanted to be around. The life of the party, he had charm and a fantastically wicked humor. In short, he had “presence.” It’s a presence that will be greatly missed.

While writing this, I pulled his six books from my bookshelf and discovered within one an unopened envelope that he’d sent me in 2015 following my motorcycle accident in Mexico’s Baja California. In it is a card with a picture of a motorcycle and a handwritten message: “No more broken bones in Baja again I hope!” He signed off, per his norm, with a hand-drawn fish. That’s the kindness of thought I so admired and which will also be greatly missed.